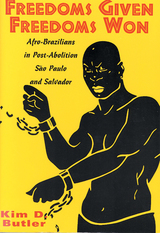 Freedoms Given, Freedoms Won explores the ways Afro-Brazilians in two major cities adapted to the new conditions of life after the abolition of slavery and how they confronted limitations placed on their new freedom. The book sets forth new ways of understanding why the abolition of slavery did not yield equitable fruits of citizenship, not only in Brazil, but throughout the Americas and the Caribbean.

Afro-Brazilians in Sao Paulo and Salvador lived out their new freedom in ways that raise issues common to the entire Afro-Atlantic diaspora. In Sao Paulo, they initiated a vocal struggle for inclusion in the creation of the nation's first black civil rights organization and political party, and they appropriated a discriminatory identity that isolated blacks. In contrast, African identity prevaled over black identity in Salvador, where social protest was oriented toward protecting the right of cultural pluralism.

Of all the eras and issues studied in Afro-Brazilian history, post-abolition social and political action has been the most neglected. Butler provides many details of this period for the first time in English and supplements published sources with original oral histories, Afro-Brazilian newspapers, and new state archival documents currently being catalogued in Bahia. Freedoms Given, Freedoms Won sets the Afro-Brazilian experience in a national context as well as situating it within the Afro-Atlantic diaspora through a series of explicit parallels, particularly with Cuba and Jamaica.

AUTHOR BIOGRAPHY
KIM D. BUTLER is assistant professor of Africana Studies at Rutgers University.
REVIEWS
"Freedoms Given, Freedoms Won . . . is essential reading for an understanding of Brazilian race relations and the black movement today. A particular virtue of the book, besides the enlightening comparative perspective itself, and the author's carefully and modestly argued analysis, is that the latter is firmly rooted in a combination of extensive first-hand interviews with survivors of the period examined, and consultation of contemporary public archives and the black press."
— Journal of Latin American Studies

"Butler does an excellent hob establishing the patterns of political behavior of people of colour in two of the most important politics of late 19th and early 20th century Brazil. Juxtaposing the two cities proves to be both illuminating and instructive."
— British Bulletin of Publications

"This book offers a clear comparative analysis of the post-abolition Afro-Brazilian community in two cities. Furthermore, among the book's many strengths is that it moves beyond a simple comparison of two populations. Butler successfully analyses her subjects within the much more broader context of the African diaspora throughout the Americas. . . . The book offers rare insight into the struggle for self-determination among a population that has traditionally lacked a historic voice."
— Law and History Review

"Kim Butler . . . proposes a theoretical framework to explain why African descendants in [Sao Paulo and Salvador] adopted different strategies of self-representations and suggests how this framework might contribute to the comparative study of the politics of freedpeople in the Afro-Atlantic diaspora. The result is an important contribution to the historiography of race and politics in Brazil that raises intriguing questions for scholars of postemancipation societies."
— H-Net Reviews