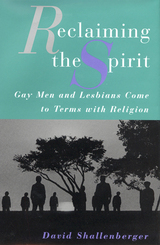 In a world in which religion and homosexuality are often by definition incompatible, it is crucial to hear from gay men and women about how they perceive themselves to be religious or spiritual people. Eliciting powerful, frank, and sometimes troubling responses, David Shallenberger interviewed gay men and women who grew up in families that belonged to traditional religions-Jewish, Roman Catholic, and Protestant-that rejected homosexuality as an unacceptable life-style. When these children grew into adulthood and "came out," many rejected the religion of their childhood as they sought out a more accepting gay community. But once they became comfortable with their new gay identity, they began to experience a spiritual hunger and a desire to be part of a religious community. Some sought to return to the traditions from which they came; others desired membership in new religious communities.

The quest for an integration of homosexuality and spirituality is the focus of Reclaiming the Spirit. Shallenberger asks how individuals can balance both a gay and a religious identity, whether coming out is a spiritual experience, and how coming out affects an individual's relationship to a traditional religious community. Divided into chapters that correspond to the common stages of spiritual integration, Reclaiming the Spirit is immensely readable and introduces an important group of voices into the hotly contested debates surrounding religion and gay participation.

DAVID SHALLENBERGER is an associate professor at the School for New Learning, DePaul University. He has published widely on homosexuality and religion in journals like Qualitative Sociology and Religious Humanism.