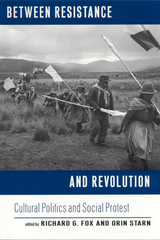 Peasants in India hugging trees to protest logging, Brazilian feminists marching to impeach a president, Okinawan television comedians joke-starting ethnic activity. All are instances of social protest that exist in the charged territory between the cataclysmic upheaval of revolutionary war and the everyday acts of private resistance. Yet these movements "in between" resistance and revolution have remained invisible to scholars of politics, culture, and society. Leading scholars in anthropology, political science, history, sociology, and ethnomusicology examine dissent and direct action in Australia, Brazil, Germany, Colombia, India, Korea, Peru, and the United States and demonstrate the importance of looking beyond these poles of protest to the midways of mobilization.

Richard Fox is professor of anthropology at Washington University in St. Louis and author of Gandhian Utopia: Experiments with Culture.

Orin Starn is assistant professor of cultural anthropology at Duke University and author of The Peru Reader: History, Culture and Politics.