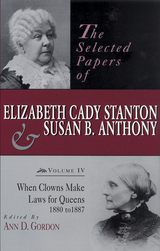 When Clowns Make Laws for Queens, 1880 to 1887 is the fourth of six planned volumes of The Selected Papers of Elizabeth Cady Stanton and Susan B. Anthony. The entire collection documents the friendship and accomplishments of two of America's most important social and political reformers.

At the opening of the fourth volume, suffragists hoped to speed passage of a sixteenth amendment to the Constitution through the creation of Select Committees on Woman Suffrage in Congress. Congress did not vote on the amendment until January 1887. Then, in a matter of a week, suffragists were dealt two major blows: the Senate defeated the amendment and the Senate and House reached agreement on the Edmunds-Tucker Act, disenfranchising all women in the Territory of Utah.

As evidenced in this volume's selection of letters, articles, speeches, and diary entries, these were years of frustration. Suffragists not only lost federal and state campaigns for partial and full voting rights, but also endured an invigorated opposition. In spite of these challenges, Stanton and Anthony continued to pursue their life's work. In 1880 both women retired from lecturing to devote attention to their monumental History of Woman Suffrage. They also opened a new transatlantic dialogue about woman's rights during a trip to Europe in 1883.

AUTHOR BIOGRAPHY
Ann D. Gordon is a research professor in the department of history at Rutgers University. She is the editor of this six-volume series.