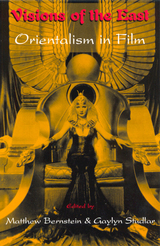 The Sheik. Pépé le Moko. Casablanca. Aladdin. Some of the most popular and frequently discussed titles in movie history are imbued with orientalism, the politically-charged way in which western artists have represented gender, race, and ethnicity in the cultures of North Africa and Asia. This is the first anthology to address and highlight orientalism in film from pre-cinema fascinations with Egyptian culture through the "Whole New World" of Aladdin. Eleven illuminating and well-illustrated essays utilize the insights of interdisciplinary cultural studies, psychoanalysis, feminism, and genre criticism. Other films discussed includeThe Letter, Caesar and Cleopatra, Lawrence of Arabia, Indochine, and several films of France's cinéma colonial.

AUTHOR BIOGRAPHY
MATTHEWBERNSTEIN is an associate professor of film studies at Emory University. He is the author of Walter Wanger: Hollywood Independent and a former coordinating editor of The Velvet Light Trap.

GAYLYNSTUDLAR is a professor of English and film and video studies at the University of Michigan. She is the author of In the Realm of Pleasure: Von Sternberg, Dietrich, and the Masochistic Aesthetic and This Mad Masquerade: Masculinity in the Jazz Age.