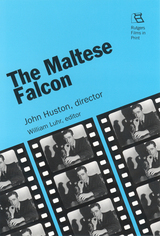 Few films have had the impact or retained the popularity of The Maltese Falcon. An unexpected hit upon its release in 1941, it helped establish the careers of John Huston and Humphrey Bogart while also helping both to transform the detective genre of movies and to create film noir. This volume includes an introduction by its editor and a shot-by-shot continuity of the film, as well as essays on its production, on literary and film traditions it drew upon, and on its reputation and influence over the last half century. Included are reviews from the time of the film's original release, the enthusiastic French response in 1946 that helped define film noir, and a close formal anaylsis of the film. In addition, the volume contains a comparison of this version to earlier film versions of the Dashiell Hammett novel, and helpful explorations of cultural, historical, and psychoanalytic issues. Like Casablanca, The Maltese Falcon has attained iconic status; this volume will contribute to the pleasure its many fans find in viewing the film again and again. William Luhr is a professor of English at St. Peter's College in New Jersey. He is the author of Raymond Chandler and Film and co-author of Blake Edwards and other books.
AUTHOR BIOGRAPHY
William Luhris an American film author and professor and the author of such works asThinking About Movies: Watching, Questioning, Enjoying,World Cinema Since 1945: An Encyclopedic HistoryandReturning to the Scene.He is also currently a professor of English atSaint Peter's CollegeinJersey City, New Jersey.