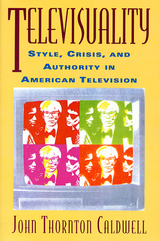 “Holling is tormented by Koyaanisqatsi dreams until he goes out and does the wild thing with a young stag . . . . ”––Synopsis from production company “Bible,” Northern Exposure, March 30, 1992

The collision of auteurism and rap––couched by primetime producers in the Northern Exposure script––was actually rather commonplace by the early 1990s. Series, and even news broadcasts, regularly engineered their narratives around highly coded aesthetic and cultural fragments, with a kind of ensemble iconography. Televisuality interrogates the nature of such performances as an historical phenomenon, an aesthetic and industrial practice, and as a socially symbolic act. This book suggests that postmodernism does not fully explain television's stylistic exhibitionism and that a reexamination of “high theory” is in order. Caldwell’s unique approach successfully integrates production practice with theory in a way that will enlighten both critical theory and cultural studies.