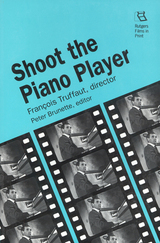 When it appeared in 1960, the inspired fun of François Truffaut's Shoot the Piano Player shocked and delighted critics and audiences around the world. Its sudden shifts of tone and mood, its willful play with genre stereotypes, and its hilarious in-jokes clearly signaled that Jean-Luc Godard's equally innovative Breathless was not a fluke. The two films heralded the arrival of the so-called New Wave, sharing with other New Wave films an insistence on low-budget, location shooting and, above all, on cinema as the personal statement of an author. These films had a tremendous impact on all filmmaking.

Peter Brunette's introduction to this book gives us new insight into the film, based in part on revisualizing it in terms of recent postmodern and poststructuralist thinking. He argues, in effect, that Truffaut was one of the directors who paved the way for a postmodern aesthetic. The volume also contains a complete and accurate continuity script of the film (based on the authoritative, wide-screen version), a series of interviews with Truffaut (including one by Hélène Laroche Davis, previously unpublished), a large number of reviews and essays, a filmography, and selected bibliography.

AUTHOR BIOGRAPHY
Peter Brunette is Professor of English and Film Studies at George Mason University. He is the author of Roberto Rossellini and co-author of Screen/Play: Derrida and Film Theory .