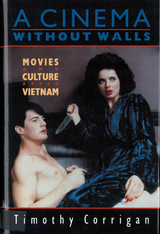 "One of the sharpest and most productive analyses of our contemporaneity and the place of cinema within it and of our new historical relations as spectators to the imaginary universe on the movie screen. This is a study that will be of intense interest to film theorists and historians, cultural critics, mass media analysts, and anyone concerned with the complicated place of culture in our world today."--Dana Polan, English and Film Studies, University of Pittsburgh

How have modern advertising techniques, the widespread use of VCRs, conglomerate takeovers of studios and film archives, cable TV, and media coverage of the Vietnam war changed the ways we watch movies? And how, in turn, have those different habits and patterns of viewing changed the ways in which films address their viewers? Drawing on a wide variety of American and European films and on many theoretical models, Timothy Corrigan investigates what he calls "a cinema without walls," taking a close look at particular films in order to see how we watch them differently in the post-Vietnam era. He examines cult audiences, narrative structure, genre films (road movies, in particular), and contemporary politics as they engage new models of film making and viewing. He thus provides a rare, serious attempt to deal with contemporary movies. Corrigan discusses filmmakers from a variety of backgrounds and cultures, including Martin Scorsese, Raoul Ruiz, Michael Cimino, Alexander Kluge, Francis Ford Coppola, Stephen Frears, and Wim Wenders. He offers detailed analyses of films such as Platoon; Full Metal Jacket; 9-1/2 Weeks; The Singing Detective; Choose Me; After Hours; Badlands; The King of Comedy; Paris, Texas; and My Beautiful Laundrette. Orchestrating this diversity, Corrigan provides a critical basis for making sense of contemporary film culture and its major achievements.
AUTHOR BIOGRAPHY
TIMOTHY CORRIGAN is a professor of English and film at Temple University. He is the author of Writing about Film and New German Film: The Displaced Image, and editor of The Films of Werner Herzog: Between Mirage and History.