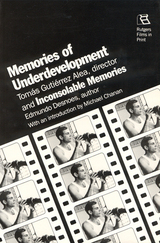 Memories of Underdevelopment was the first great international success of Cuban cinema. The film provides a complex portrait of Sergio, a disaffected bourgeois intellectual who remains in Havana after the Revolution, suspended between two worlds. He can no longer accept the values of his family's reactionary past and yet boredom and the conditioning of his early life prevent him from committing himself to the new revolutionary society. Sergio's story is played out in the turbulent period of the Bay of Pigs invasion and the 1962 missile crisis, events he can only watch on his television screen or from his apartment balcony.The film, initially banned by the U.S. government as part of its trade quarantine of Cuba, was shown here five years after its original release. But American critics responded enthusiastically to it and the National Society of Film Critics bestowed an award on its director.