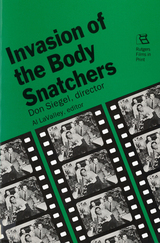 Invasion of the Body Snatchers (1956) is a low-budget science fiction film that has become a classic. The suspense of the film lies in discovering, along with Miles, the central character (played by Kevin McCarthy), who is "real" and who is not, and whether Miles and Becky (played by Dana Wynter) will escape the pod takeover. As the center of the film moves outward from a small-town group of neighbors to the larger political scene and institutional network (of police, the FBI, hospital workers), the ultimate question is whether "they" have taken over altogether. Although Invasion can be interpreted in interesting ways along psychological and feminist lines, its importance as a text has centered primarily on political and sociological readings. In his introduction to this volume, Al LaValley explores the politics of the original author of the magazine serial story on which the film is based, Don Siegel; and of its screenwriter, Daniel Mainwaring. And he looks at the ways the studio (Allied Artists) tried to neutralize certain readings by tacking on an explanatory frame story. The commentary section includes readings by Stephen King, Peter Biskind, Nora Sayre, and Peter Bogdanovich. A section of postproduction documents reproduced here (many for the first time) includes many written by Wanger and Siegel. The volume also contains two previously unpublished framing scripts written for Orson Welles. For students and individual enthusiasts, the contextual materials are particularly interesting in showing how crucial the postproduction history of a film can be. A filmography and bibliography are also included in the volume. Al LaValley is the director of film studies at Dartmouth. He is the author of many articles on film and editor of Mildred Pierce in the Wisconsin screenplay series.
AUTHOR BIOGRAPHY
Al LaValley is a professor emeritus of film studies at Dartmouth College and the editor of Invasion of the Body Snatchers (Rutgers University Press).