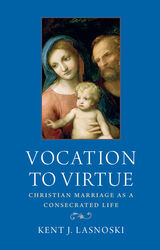 Vocation to Virtue seeks to answer a perennial difficulty in the Catholic theology of marriage: how do the practice and bond of marriage lead to Christian perfection in spouses and their children? If the Second Vatican Council is correct in saying that all in the church are called to Christian perfection, we need an account of how those consecrated in the sacrament of marriage can fulfill that vocation. If the perfection of charity consists in Christ himself, then couples must imitate Christ. But how? If Christ is the poor, chaste, and obedient bridegroom of the church, then spouses achieve holiness inasmuch as they participate in Christ's own virtues: poverty, chastity, and obedience. The thesis is that the language of the evangelical virtues (poverty, chastity, and obedience), a rule of life, and robust preparation (maybe a novitiate) belongs as properly to marriage as to consecrated religious life. Both states are specifications of a common baptismal consecration to Christ himself. Lasnoski seeks to establish this fact and constructively apply this language to conjugal life.

The book begins by explaining our marriage crisis and theological paradigms for speaking about Christian marriage as "relationship" or as "practice," and considers modern scholarly attempts to relate conjugal life and consecrated religious life. The book then offers a theological groundwork in Christ and the Trinity for a deeper, noncompetitive relationship between the consecrated religious life and married life. It offers an Augustinian account of the relationship between marriage and consecrated life, and develops the ecclesial connection between the states with recourse to John's Gospel, which sees Christian life in terms of "householding." The church's tradition has a dialogical relationship between the consecrated and married - a mutual sharing of both "monastic" and "domestic" language. The final chapter develops practices of Christian householding for conjugal life using the language of poverty, chastity, and obedience, a rule of life, and a kind of novitiate preparation.
AUTHOR BIOGRAPHY
Kent J. Lasnoski is associate professor of theology at Wyoming Catholic College.
TABLE OF CONTENTS
Contents
Acknowledgments
Introduction
1. Speaking of Marriage—Relationship or Practice?
2. Is Marriage Made in a Monastery?
3. Foundations for a Consecrated Way
4. Something New from Someone Old—Augustine
5. Everyone’s Doing It—Householding with God
6. Consecrating Conjugal Life—A Construction Site
Bibliography
Index