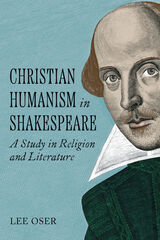 Shakespeare, Lee Oser argues, is a Christian literary artist who criticizes and challenges Christians, but who does so on Christian grounds. Stressing Shakespeare’s theological sensitivity, Oser places Shakespeare’s work in the “radical middle,” the dialectical opening between the sacred and the secular where great writing can flourish. According to Oser, the radical middle was and remains a site of cultural originality, as expressed through mimetic works of art intended for a catholic (small “c”) audience. It describes the conceptual space where Shakespeare was free to engage theological questions, and where his Christian skepticism could serve his literary purposes. Oser reviews the rival cases for a Protestant Shakespeare and for a Catholic Shakespeare, but leaves the issue open, focusing, instead, on how Shakespeare exploits artistic resources that are specific to Christianity, including the classical-Christian rhetorical tradition. The scope of the book ranges from an introductory survey of the critical field as it now stands, to individual chapters on A Midsummer Night’s Dream, The Merchant of Venice, the Henriad, Hamlet, and King Lear. Writing with a deep sense of literary history, Oser holds that mainstream literary criticism has created a false picture of Shakespeare by secularizing him and misconstruing the nature of his art. Through careful study of the plays, Oser recovers a Shakespeare who is less vulnerable to the winds of academic and political fashion, and who is a friend to the enduring project of humanistic education. Christian Humanism in Shakespeare: A Study in Religion and Literature is both eminently readable and a work of consequence.
TABLE OF CONTENTS
Contents
Acknowledgments
Brief Note on Texts, Citations, and Abbreviations
Preface
Introduction: Thinking of Shakespeare as a Christian
Chapter 1. Theological Comedy in A Midsummer Night’s Dream
Chapter 2. Moral Figures in The Merchant of Venice
Chapter 3. The Henriad: A Skeptical Christian Writes History
Chapter 4. Free Will in Hamlet?
Chapter 5. On Not Understanding King Lear’s Hidden God
Conclusion: Shakespeare and the Radical Middle
Bibliography
Index
About the Author