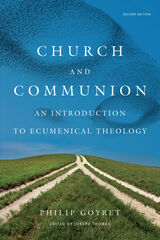 This book is about ecumenism, from a Catholic point of view. The first part, chapters 1 and 2, describe the history of divisions within the Church, as well as of the efforts to bring about Christian unity. The second part examines Ecumenism from a systematic theological perspective.

This first part takes into account the different factors that led to definitive ruptures within the Church, which usually are not only theological. The text gives useful information about what happened after the respective divisions as well as about the various attempts to restore unity, the development of the Ecumenical Movement in the 20th Century, and the current situation of ecumenical dialogue within the Catholic Church. While offering insight into the sad history that has led to the present disunity, this work also highlights the way Christians have sought to bring to fulfill the petition of Christ that his disciples might be one, as He and the Father are one.

The second part―chapters three, four and five―offers a systematic theological analysis of unity in the Church, from the point of view of dogmatic theology. We find here an explanation of the Catholic concept of ecumenism, of how Catholic theology understands the unity of the Church, and, finally, of the Catholic principles which sustain the efforts for regaining unity in the Church. The Second Vatican Council, and particularly the Constitution Lumen gentium and the Decree Unitatis redintegratio, are at the foundation of these reflections. At the same time, since the theology of the Church and the life of the Church are intimately connected, there is a profound link between this dogmatic section and the earlier historical section.

The last chapter, about the practice of ecumenism, is also written from a theological perspective, but with more links with life and spirituality. The chapter recalls that ecumenism can never simply remain a set of theological principles, but rather inspires an attitude and action in charity which are essential to the Christian life.
TABLE OF CONTENTS
Contents
Introduction
Chapter 1: The Major Non-Catholic Denominations
Chapter 2: A Historical Perspective on Ecumenism
Chapter 3: A Theological Framework for Ecumenism
Chapter 4: Ecclesial Communion
Chapter 5: Catholic Principles of Ecumenism
Chapter 6: Ecumenism in Practice
Bibliography
Scriptural Index
General Index