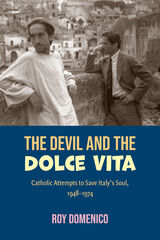 Italy’s economic expansion after World War Two triggered significant social and cultural change. Secularization accompanied this development and triggered alarm bells across the nation’s immense Catholic community. The Devil and the Dolce Vita is the story of that community – the church of Popes Pius XII, John XXIII and Paul VI, the lay Catholic Action association, and the Christian Democratic Party – and their efforts in a series of culture wars to preserve a traditional way of life and to engage and tame the challenges of a rapidly modernizing society.

Roy Domenico begins this study during the heady days of the April 1948 Christian Democratic electoral triumph and ends when pro-divorce forces dealt the Catholics a defeat in the referendum of May 1974 where their hopes crashed and probably ended. Between those two dates Catholics engaged secularists in a number of battles – many over film and television censorship, encountering such figures as Roberto Rossellini, Luchino Visconti, Federico Fellini, and Pier Paolo Pasolini. The Venice Film Festival became a locus in the fight as did places like Pozzonovo, near Padua, where the Catholics directed their energies against a Communist youth organization; and Prato in Tuscany where the bishop led a fight to preserve church weddings. Concern with proper decorum led to more skirmishes on beaches and at resorts over modest attire and beauty pageants. By the 1960s and 1970s other issues, such as feminism, a new frankness about sexual relations, and the youth rebellion emerged to contribute to a perfect storm that led to the divorce referendum and widespread despair in the Catholic camp.
TABLE OF CONTENTS
Contents
Acknowledgments
Abbreviations
Introduction
1. The “Clerical State” and Its Critics
2. Media and Censorship
3. Family Matters
4. The Dolce Vita
5. “Because This World as We Know It Is Passing Away”
Bibliography
Index