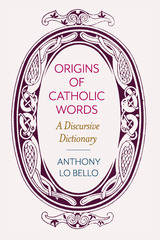 The study of the vocabulary of the Catholic religion may be taken as a definition of the liberal arts. Origins of Catholic Words is a work of reference organized like a lexicon or encyclopedia. There is an entry for each word of importance having to do with the Catholic Church. Anthony Lo Bello gives the etymology of the word, describes what it means, and then adds whatever further discussion he feels is needed; in some cases this amounts to several pages.

Lo Bello has assembled, over a number of years, lucid and wide-ranging remarks on the etymology and history of the words that occur in the study of the Catholic religion. A true labor of love, this sophisticated, one-of-a-kind dictionary will delight those who take pleasure in learning. Anyone interested in words and language—indeed, in culture, will find something interesting on every page. This is a book one may read and not just consult.

There have been many changes in the Catholic Church since 1962, and one of the goals of this book is to describe what will soon be missing from the memories of all living people. Origins of Catholic Words may, Lo Bello hopes, make its small contribution so that the situation not arise, which would convict Newman of error when he wrote, “What the Catholic Church once has had, she never has lost.”
TABLE OF CONTENTS
Contents
Preface
A
B
C
D
E
F
G
H
I
J
K
L
M
N
O
P
Q
R
S
T
U
V
W
X
Y
Z
Bibliography
Index