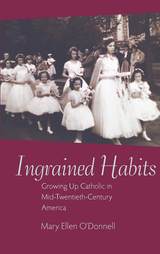 Born Catholic. Raised Catholic. Americans across generations have used these phrases to describe their formative days, but the experience of growing up Catholic in the United States has changed over the last several decades. While the creed and the sacraments remain the same, the context for learning the faith has transformed. As a result of demographic shifts and theological developments, children face a different set of circumstances today from what they encountered during the mid-twentieth-century. Through a close study of autobiographical and fictional texts that depict the experience, Ingrained Habits explores the intimate details of everyday life for children growing up Catholic during the 1940s, 50s, and 60s. These literary portrayals present upbringings characterized by an all-encompassing encounter with religion. The adult authors of such writings run the gamut from vowed priests to unwavering atheists and their depictions range from glowing nostalgia to deep-seated resentment; however, they curiously describe similar experiences from their childhood days in the Church.
TABLE OF CONTENTS
Contents
Acknowledgments
Preface
Introduction
1. How Come You’re Not Named after a Saint? Growing Up Catholic in Mid-Twentieth- Century America
2. Like an Owner’s Manual for a Very Complicated Vehicle: Learning the Rules in the Classroom and the Confessional
3. I Was Born a Catholic and I Think I Will Die One: Inheriting Religion in the Home
4. In Death, as in Life, We Will Be Irish: Constructing Identities in the Community
Conclusion
Bibliography
Index