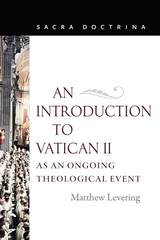 Contemporary scholars often refer to “the event of Vatican II,” but what kind of an event was it? In this first book of the new CUA Press series Sacra Doctrina, Matthew Levering leads his readers to see the Council as a “theological event”—a period of confirming and continuing God’s self-revelation in Christ into a new historical era for the Church.

This is an introduction to Vatican II with a detailed summary of each of its four central documents—the dogmatic constitutions—followed by explanations of how to interpret them. In contrast to other introductions, which pay little attention to the theological soil in which the documents of Vatican II germinated, Levering o­ffers a reading of each conciliar Constitution in light of a key theological author from the era: René Latourelle, SJ for Dei Verbum (persons and propositions); Louis Bouyer, CO for Sacrosanctum Concilium (active participation); Yves Congar, OP for Lumen Gentium (true and false reform); and Henri de Lubac, SJ for Gaudium et Spes (nature and grace).

This theological event is “ongoing,” Levering demonstrates, by tracing in each chapter the theological debates that have stretched from the close of the council till the present, and the difficulties the Church continues to encounter in encouraging an ever deeper participation in Jesus Christ on the part of all believers. In this light, the book’s final chapter compares the historicist (Massimo Faggioli) and Christological (Robert Imbelli) interpretations of Vatican II, arguing that historicism can undermine the Council’s fundamental desire for a reform and renewal rooted in Christ. The conclusion addresses the concerns about secularization and loss of faith raised after the Council by Henri de Lubac, Joseph Ratzinger, and Yves Congar, arguing that contemporary Vatican II scholarship needs to take these concerns more seriously.
TABLE OF CONTENTS
Contents
Acknowledgments
Introduction
1. Persons and Propositions: Dei Verbum in Context
2. Active Participation: Sacrosanctum Concilium in Context
3. True and False Reform: Lumen Gentium in Context
4. Nature and Grace: Gaudium et Spes in Context
5. Vatican II as an Ongoing Theological Event: The Way Forward
Conclusion
Bibliography
Index