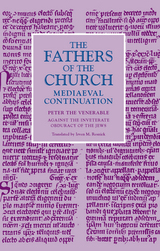 With this translation, Irven M. Resnick makes the complete work available for the first time in English
TABLE OF CONTENTS
Contents
Acknowledgments
Abbreviations
Select Bibliography
Introduction
Peter the Venerable’s Compositions
Polemic Against the Jews
Conclusion
Against the Inveterate Obduracy of the Jews
Prologue
Chapter One: That the Messiah (Christus) is the Son of God
Chapter Two: In which Christ is shown specifically to be God
Chapter Three: That, unlike what the Jews think, Christ is not a temporal king but the eternal and celestial King
Chapter Four: In which it is demonstrated that the Christ is not still to come, as the Jews foolishly think, but rather that he has come at a sure and preordained time for the salvation of the world
Chapter Five: On the ridiculous and very foolish fables of the Jews
Indices
General Index
Index of Holy Scripture
Index of Talmudic Citations
Index of Quranic Citations