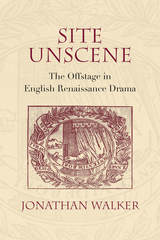 Site Unscene: The Offstage in English Renaissance Drama explores the key role of dramatic episodes that occur offstage and beyond the knowledge-generating faculty of playgoers’ sight. Does Ophelia drown? Is Desdemona unfaithful to Othello? Does Macbeth murder Duncan in his sleep? Site Unscene considers how the drama’s nonvisible and eccentric elements embellish, alter, and subvert visible action on the stage.

Jonathan Walker demonstrates that by removing scenes from visible performance, playwrights take up the nondramatic mode of storytelling in order to transcend the limits of the stage. Through this technique, they present dramatic action from the subjective, self-interested, and idiosyncratic perspectives of individual characters. By recovering these offstage elements, Walker reveals the pervasive and formative dynamic between the onstage and offstage and between the seen and unseen in Renaissance drama.