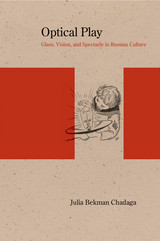 Julia Bekman Chadaga’s ambitious study posits that glass—in its uses as a material and as captured in culture—is a key to understanding the evolution of Russian identity from the eighteenth century onward. From the contemporary perspective, it is easy to overlook how glass has profoundly transformed vision. Chadaga shows the far-reaching effects of this phenomenon.

Her book examines the similarities between glass and language, the ideological uses of glass, and the material’s associations with modernity, while illuminating the work of Lomonosov, Dostoevsky, Zamyatin, and Eisenstein, among others. In particular, Chadaga explores the prominent role of glass in the discourse around Russia’s contentious relationship with the West—by turns admiring and antagonistic—as the nation crafted a vision for its own future. Chadaga returns throughout to the spectacular aspect of glass and shows how both the tendentious capacity and the playfulness of this material have shaped Russian culture.