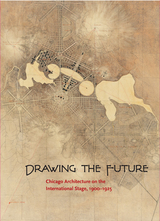 Drawing the Future: Chicago Architecture on the International Stage, 1900–1925 is an illustrated catalog with companion essays for an exhibition of the same name at the Mary and Leigh Block Museum of Art at Northwestern University. Drawing the Future explores the creative ferment among Chicago architects in the early twentieth century, coinciding with similar visions around the world. The essays focus on the highlights of the exhibition. David Van Zanten profiles Walter Burley Griffin and Marion Mahony Griffin, Chicago architects who created an influential, prize-winning plan for Canberra, the new capital of Australia. Ashley Dunn looks at the two exhibits at the Musée des Arts Décoratifs in Paris, one devoted to the Griffins in 1914 and the other to the French architect Tony Garnier in 1925, demonstrating the impact of World War I on city planning and architecture. Leslie Coburn examines Chicago’s Neighborhood Center Competition of 1914–15, which sought to redress gaps in Daniel Burnham’s plan of 1909. The ambition and reach of Chicago architecture in this epoch would have lasting influence on cities of the future.

David Van Zanten is the Mary Jane Crowe Professor in Art and Art History at Northwestern University. He wroteSullivan’s City: The Meaning of Ornament for Louis Sullivan (2000) and edited Marion Mahony Griffin Reconsidered (2011).

Ashley Elizabeth Dunn is a graduate student in art history at Northwestern University.

Leslie Coburn is a graduate student in art history at the University of Illinois at Chicago.