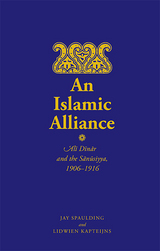 An Islamic Alliance uses non-European sources to portray the defense, by devoutly Islamic leaders, of some of the last parts of the African continent to be conquered during the imperial European "scramble for Africa" that ended with the First World War. These surviving pieces of diplomatic correspondence concentrate on the alliance between Ali Dinar, prince of the sultanate of Dar Fur in the western Sudan, and the leaders of the Sanusi brotherhood then based in southern Libya. In contrast to the European view of the alliance as ephemeral, the documents indicate a sincere, passionate attempt to join--despite immense physical difficulties--an ancient monarchist tradition to a more modern, trade-based sociopolitical organization.
AUTHOR BIOGRAPHY
Jay Spaulding is a professor emeritus of History at Kean University in Union, New Jersey.

Lidwien Kapteijns is an Elizabeth Kimball Kendall and Elisabeth Hodder Professor of History at Wellesley College.
TABLE OF CONTENTS