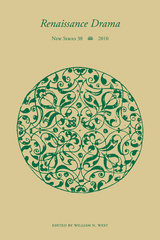 Renaissance Drama, an annual interdisciplinary publication, is devoted to drama and performance as a central feature of Renaissance culture. The essays in each volume explore the traditional canon of drama, the significance of performance, broadly construed, to early modern culture, and the impact of new forms of interpretation on the study of Renaissance plays, theater, and performance.

Volume 38 includes essays that explore topics in early modern drama ranging from Shakespeare’s Jewish questions in The Merchant of Venice and the gender of rhetoric in Shakespeare’s sonnets and Jonson’s plays to improvisation in the commedia dell’arte and the rebirth of tragedy in 1940 Germany.

William N. West is an associate professor of English, classics, and comparative literary studies at Northwestern University. He is the author of Theatres and Encyclopedias in Early Modern Europe (2002). He is currently at work on a book with the working title Understanding and Confusion in the Elizabethan Theaters.