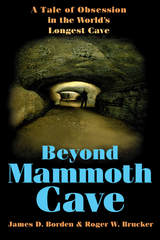 In Beyond Mammoth Cave: A Tale of Obsession in the World’s Longest Cave, James D. Borden and Roger W. Brucker provide gripping first-person accounts of the discoveries, including Roppel Cave, that made Kentucky’s Mammoth Cave three times longer than any other cave in the world.

Borden, a relative newcomer, and Brucker, a veteran explorer, bring a personal and sometimes conflicting view of their roles as adversaries in a race that lasted from 1972 through 1983 to find “big cave.” They describe hazardous adventures, precarious climbs, and close calls from falling rocks. The perils are many and the trek arduous as they squirm through muddy tubes, wade in neck-deep cold water, and crawl over sharp rocks and gritty sand. Theirs is a tale of agonizing endurance spiced by spectacular discoveries.

But the cave was not the sole obstacle. The explorations were complicated by political intrigue and the rivalry between the Kentucky-based Cave Research Foundation and the Central Kentucky Karst Coalition, each seeking to make discoveries and hide secrets. Extreme stress, of course, evoked extreme behavior, ranging from selfishness to sacrifice, from outrageous humor to the deadly serious response.

Beyond Mammoth Cave includes maps by Patricia Kambesis that show the progression of cave discoveries in relation to the topography. Original line drawings by well-known illustrator Linda Heslop capture the dark mystery of the exploration. The book features five black and white photographs as a color gallery of photographs.

A sequel to The Longest Cave by Brucker and Richard A. Watson, this book is a comprehensive update of the speleological investigations in the Mammoth Cave region. Brucker’s involvement provides continuity to the investigation.

James D. Borden is a data storage manager at Vencor, Inc. Louisville, Kentucky. He is a Fellow of the National Speleological Society, a past director of the Cave Research Foundation, and managing director of the Central Kentucky Karst Coalition.

Roger W. Brucker, retired Dayton, Ohio, advertising executive, fellow of the National Speleological Society, and past president of the Cave Research Foundation, is coauthor of three books: The Caves Beyond (with Joe Lawrence Jr.), Trapped! The Story of the Floyd Collins (with Robert K. Murray),and The Longest Cave (with Richard A. Watson), also available from Southern Illinois University Press.

“[T]his book tells the whole truth  . . . of the political intrigue and rivalry between the Cave Research Foundation (CRF) and the Central Kentucky Karst Coalition (CKKC) as they each make discoveries and hide secrets in the race to connect Mammoth Cave with Roppel Cave. With books like this there will never be a shortage of cavers.”—National Speleological Society News

“Beyond Mammoth Cave will appeal to both cave explorers and armchair explorers. . . .  It is a story that draws one in and is an honest look at real exploration by ordinary people who have ordinary faults but become obsessive and legitimate explorers. The conflicts are real and add a credible and cohesive level of detail to the description of the events.”—Emily Davis Mobley, coeditor of A Guide to Speleological Literature of the English Language: 1794–1996