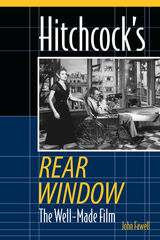 In the process of providing the most extensive analysis of Alfred Hitchcock’s Rear Window to date, John Fawell also dismantles many myths and clichés about Hitchcock, particularly in regard to his attitude toward women.

Although Rear Window masquerades quite successfully as a piece of light entertainment, Fawell demonstrates just how complex the film really is. It is a film in which Hitchcock, the consummate virtuoso, was in full command of his technique. One of Hitchcock’s favorite films, Rear Window offered the ideal venue for the great director to fully use the tricks and ideas he acquired over his previous three decades of filmmaking. Yet technique alone did not make this classic film great; one of Hitchcock’s most personal films, Rear Window is characterized by great depth of feeling. It offers glimpses of a sensibility at odds with the image Hitchcock created for himself—that of the grand ghoul of cinema who mocks his audience with a slick and sadistic style.

Though Hitchcock is often labeled a misanthrope and misogynist, Fawell finds evidence in Rear Window of a sympathy for the loneliness that leads to voyeurism and crime, as well as an empathy for the film’s women. Fawell emphasizesa more feeling, humane spirit than either Hitchcock’s critics have granted him or Hitchcock himself admitted to, and does so in a manner of interest to film scholars and general readers alike.

John Fawell is an associate professor in the Department of Humanities at the College of General Studies, Boston University. He writes widely on film and literature, covering everything from classical literature to filmmakers such as Hitchcock, Jacques Tati, Eric Rohmer, and Blake Edwards.

“Fawell encourages readers to see and hear connections that merit more thought and appreciation than casual viewing would suggest. As Fawell moves from one topic to another and points out the film’s many different kinds of interconnections, the reader will come to understand exactly how well-made Rear Window is. . . .  [R]eaders will come away with a better appreciation of the reasons why critics value the film so highly.”—Hitchcock Annual


“John Fawell builds his study on the previous research of other scholars, but he also questions some of their assumptions and criticisms about Hitchcock and his films in a most lively fashion. His study is a solid and substantial analysis.”—Gene Philips, editor of Stanley Kubrick: Interviews and author of Alfred Hitchcock