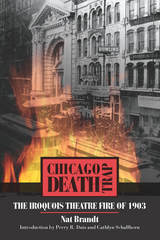 On the afternoon of December 30, 1903, during a sold-out matinee performance, a fire broke out in Chicago’s Iroquois Theatre. In the short span of twenty minutes, more than six hundred people were asphyxiated, burned, or trampled to death in a panicked mob’s failed attempt to escape. In Chicago Death Trap: The Iroquois Theatre Fire of 1903, Nat Brandt provides a detailed chronicle of this horrific event to assess not only the titanic tragedy of the fire itself but also the municipal corruption and greed that kindled the flames beforehand and the political cover-ups hidden in the smoke and ash afterwards.

Advertised as “absolutely fireproof,” the Iroquois was Chicago’s most modern playhouse when it opened in the fall of 1903. With the approval of the city’s building department, theater developers Harry J. Powers and William J. Davis opened the theater prematurely to take full advantage of the holiday crowds, ignoring flagrant safety violations in the process.

The aftermath of the fire proved to be a study in the miscarriage of justice. Despite overwhelming evidence that the building had not been completed, that fire safety laws were ignored, and that management had deliberately sealed off exits during the performance, no one was ever convicted or otherwise held accountable for the enormous loss of life.

Lavishly illustrated and featuring an introduction by Chicago historians Perry R. Duis and Cathlyn Schallhorn, Chicago Death Trap: The Iroquois Theatre Fire of 1903 is rich with vivid details about this horrific disaster, captivatingly presented in human terms without losing sight of the broader historical context.

Veteran journalist Nat Brandt is the author of ten previous books, including The Man Who Tried to Burn New York and The Town That Started the Civil War. A former editor-in-chief of Publishers Weekly, Brandt was also an editor for The New York Times and managing editor of American Heritage.

REVIEWS
“Brandt . . . deftly lays out the story of a tragedy waiting to happen in a city with a corrupt government and greedy businessmen. . . . In the one hundred years since the fire, the worldwide horror and anger over the Iroquois calamity has faded away. But Brandt’s carefully documented, readable account reminds us what all the shouting was about.”—Chicago Sun-Times


“Journalist [Nat] Brandt has written a riveting narrative of a tragedy that affected not only Chicago but the entire world. Public libraries will want to consider this readable book for their disaster collections while academic libraries that collect Chicago materials will find it essential.”—Library Journal

“Nat Brandt has unearthed a plethora of interesting, off-beat, and unusual tales and facts that balance a methodical minute-by-minute account of the most horrific building fire disaster in Chicago history. . . . The depth of research Brandt brings to the topic is the best compilation of historical material dealing with the fire and its subsequent hearings that I have ever read.”—Richard Lindberg, author of Return to the Scene of the Crime: A Guide to Infamous Places in Chicago

“[F]ew who pass through [the Ford Center for the Performing Arts Oriental Theater's] doors realize that the building sits on the site of one of the most horrific tragedies in American history: the Iroquois Theatre fire that claimed the lives of six hundred and two people, over two-thirds of them women and children, on the afternoon of December 30, 1903. As Nat Brandt’s fascinating narrative reveals, this is a multilayered story that illuminates many aspects of life in the city and on the stage.”—Perry R. Duis and Cathlyn Schallhorn, from the Introduction