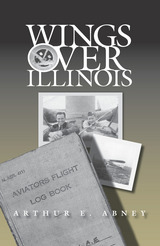 Wings over Illinois recounts World War II veteran Arthur Abney’s illustrious aviation career, effectively documenting a span in our own nation’s history from the vantage of the skies. Abney describes a lifetime of experience, from his time as an eager young pilot with the Flying Egyptians to his tour of service during World War II, his years with the Illinois Department of Aeronautics, American Airlines, and the Southern Illinois University Aviation Management and Flight program.
Abney introduces readers to hangar flying—exciting end-of-day flight tales told in the hangar—with sixty stories provided by military and civilian airmen from across the country. Included are such accounts as a 1943 bombing squadron assignment over Saipan in a typhoon, an engine freeze on takeoff during a solo training flight, a white-knuckle Bermuda Triangle flight, and a power failure on a homebuilt aircraft. Complementing Abney’s own experiences, these stories offer insights into the split-second decision making necessary to resolve problems in the air.
In this fascinating autobiography Abney takes readers on a journey through nearly seven decades of a life in aviation.
AUTHOR BIOGRAPHY
Arthur E. Abney is a former director of the Illinois Department of Aeronautics and a member of the Illinois Aviation Hall of Fame. Abney has also served on the advisory board for the aviation programs at SIU Carbondale.
REVIEWS
“Arthur Abney's Wings over Illinois is a thoughtful look back at a wonderful career in aviation spanning World War II, the postwar period, when he worked with the state of Illinois and American Airlines, and his “retirement” at Southern Illinois University Carbondale. Abney has accompanied his own memoir with colorful hangar stories submitted by many of his contemporaries in the aviation field.”—David NewMyer, Professor and Chair, Department of Aviation Management and Flight, Southern Illinois University Carbondale
— -