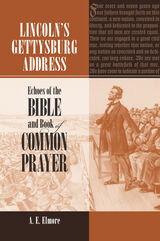 While it is common knowledge that Abraham Lincoln’s writings were influenced by the King James Bible, until now no full-length study has shown the precise ways in which the Gettysburg Address uses its specific language. This revealing investigation provides a new way to think about the speech and its author.
AUTHOR BIOGRAPHY

A former trial lawyer and professor of law and literature, A. E. Elmore (1938–2016) contributed essays to a number of books, including American Fiction: Form and Function and The Vanderbilt Tradition, among others.

“This book offers an extraordinarily thorough examination of the words, concepts, and literary associations of Abraham Lincoln’s Gettysburg Address.  Its arguments about the connections of this famous speech to the King James Bible are convincing; its examination of connections to Shakespeare, the Book of Common Prayer, and landmark statements of American political history are provocative in the best way.”—Mark A. Noll, author of The Civil War as a Theological Crisis

“A. E. Elmore demonstrates Lincoln’s skill as a wordsmith and shows in intricate and persuasive detail how his language in the Gettysburg Address closely reflected both the King James Bible and the Book of Common Prayer. Lincoln borrowed from these texts, refracted the words through his own experience and sense of rhythm, and produced the most elegant public address in American history.  Elmore’s book should be essential reading for anyone interested in the language, ideas, and impact of Lincoln’s statement.”—John B. Boles, author of The South Through Time: A History of an American Region

“Elmore’s suggestion that Lincoln deliberately drew from [the King James Version of scripture and the Protestant Episcopal Church’s Book of Common Prayer, two majestic literary sources, to reach out to a Catholic-Baptist-Methodist-Episcopal-Presbyterian-Quaker-Jewish-etc. audience is both thoughtful and exceptionally well argued [and] this is a genuinely provocative book. Indeed, after one puts this volume down, it will be impossible to read the Gettysburg Address in the same light again. Elmore’s Lincoln’s Gettysburg Address belongs on the shelf of everyone interested in the powerful role that ‘mere words’ played during the American Civil War.”—Ferenc Szasz in H-CivWar

“Elmore convincingly argues that Lincoln was a master at making biblical and literary allusions in his greatest speech as well as in pulling from the likes of Euclidian geometry, Shakespeare, and John C. Calhoun, among other slavery apologists [and this book] proves to be quite revelatory. . . . Elmore digs deep into the religious context of the time and fleshes out more completely here than other writers Lincoln’s wealth of understanding of the Bible.”—Register of the Kentucky Historical Society

Prologue: Another Time, Another Place
1. The Forgotten Bible
2. Lincoln’s Knowledge of Bible and Prayer Book
3. Birth and Rebirth
4. Fitting and Proper
5. Consecrate—Dedicate—Hallow
6. O Brave New Words
7. “Under God”—Aforethought or Afterthought?
8. Controversial Proposition
9. The Essence of Lincoln’s Style
10. The Heart of the Message
Epilogue: Catechism and Conclusion