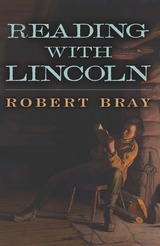 Through extensive reading and reflection, Abraham Lincoln fashioned a mind as powerfully intellectual and superlatively communicative as that of any other American political leader. Reading with Lincoln uncovers the how of Lincoln’s inspiring rise to greatness by connecting the content of his reading to the story of his life.

At the core of Lincoln’s success was his self-education, centered on his love of and appreciation for learning through books. From his early studies of grammar school handbooks and children’s classics to his interest in Shakespeare’s Macbeth and the Bible during his White House years, what Lincoln read helped to define who he was as a person and as a politician. This unique study delves into the books, pamphlets, poetry, plays, and essays that influenced Lincoln’s thoughts and actions.

Exploring in great depth and detail those readings that inspired the sixteenth president, author Robert Bray follows Lincoln’s progress closely, from the young teen composing letters for illiterate friends and neighbors to the politician who keenly employed what he read to advance his agenda. Bray analyzes Lincoln’s radical period in New Salem, during which he came under the influence of Anglo-American and French Enlightenment thinkers such as Thomas Paine, C. F. Volney, and Voltaire, and he investigates Lincoln’s appreciation of nineteenth-century lyric poetry, which he both read and wrote. Bray considers Lincoln’s fascination with science, mathematics, political economics, liberal social philosophy, theology, and the Bible, and devotes special attention to Lincoln’s enjoyment of American humor. While striving to arrive at an understanding of the role each subject played in the development of this remarkable leader, Bray also examines the connections and intertextual relations between what Lincoln read and how he wrote and spoke.

This comprehensive and long-awaited book provides fresh insight into the self-made man from the wilderness of Illinois. Bray offers a new way to approach the mind of the political artist who used his natural talent, honed by years of rhetorical study and practice, to abolish slavery and end the Civil War.

Robert Bray is the Colwell Professor of English at Illinois Wesleyan University. He is the author or editor of numerous articles and books, including Rediscoveries: Literature and Place in Illinois.

“Nobody has devoted more attention to tracing out the roots of Lincoln’s intellectual curiosity, especially in literature, than Robert Bray. . . . When Bray is good, he is very good, and not only very good but eloquent. And certainly Reading with Lincoln must move at once onto the list of must-reads in the Lincoln literature.”—Allen C. Guelzo, Journal of the Abraham Lincoln Association

“Tracing Lincoln from a teenager who wrote letters for his illiterate neighbors and his small circle of friends to his New Salem years when he read works by Thomas Paine and Voltaire, Bray moves to the future president as a man who became a lifelong reader and a writer, making the connections between what he read and how he wrote and spoke.” —Julie Cellini, Illinois Times

“Bray is to be commended for his outstanding scholarship and lively presentation of Lincoln’s reading history. Lincoln spent a large portion of his life immersed in books. Bray shows that though we are immersed in Lincoln studies, a new Lincoln can still be unearthed. A man who studied so much merits much study, and Bray’s originality in doing so rewards his readers.” —John Patrick Daly, H-CivWar

“In this subtle, insightful study, Robert Bray offers the first scholarly account of Lincoln’s reading. A professor of English, Bray has a keen literary sensibility and broad culture that enable him to shed bright light on the development of Lincoln’s taste and on the ways in which the books he read influenced his thinking and writing.”—Michael Burlingame, author of Abraham Lincoln: A Life

“[Robert Bray] brings a literary scholar’s skill and sensitivity to his subject. . . . The Lincoln scholar will surely appreciate Bray’s analyses of key texts that Lincoln read.”—James Tackach, Register of the Kentucky Historical Society

“Robert Bray has not only discovered every book and text and poem and treatise and humorous sketch and Shakespeare play that Lincoln read; he has also read them himself, and he takes the reader inside those readings—and therefore inside Lincoln’s mind—in this excellent book.”—William Lee Miller, author of President Lincoln: The Duty of a Statesman

“Abraham Lincoln’s reading, like almost everything else about him, was quite distinctive. Robert Bray’s approach to this important aspect of Lincoln’s development is both original and provocative, for it aims at giving us not only the substance of Lincoln’s most consequential reading but the all-important texture and flavor as well.”—Douglas L. Wilson, author of Lincoln’s Sword: The Presidency and the Power of Words

“Reading with Lincoln adds an important dimension to our understanding of our sixteenth president’s mind. It effectively delineates the rich resources of literature and language that he brought to his political career. Bray’s discussion of Lincoln’s reading in religion and science is especially cogent. It should finally put to rest the claim that Lincoln was a Christian.”—Fred Kaplan, author of Lincoln: The Biography of a Writer