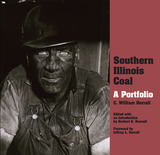 The coal mining photographs of C. William Horrell, taken across the southern Illinois Coal Belt over a twenty-year period from 1966 to 1986, are extraordinary examples of documentary photography—so stark and striking that captions often seem superfluous.

Horrell’s photographs capture the varied phenomena of twentieth-century coal mining technology: the awesome scale of surface mining machines and their impact on the land; massive machines forced into narrow passageways with inches to spare as they carry coal from the face to conveyer belts; and, more significant, the advent of continuous miners, machines that can handle four previously separate processes and which have been a fixture in underground or “deep” mines since the mid-1960s.

Horrell was also intrigued by the related activities of mining, including coal’s processing, cleaning, and transportation, as well as the daily, behind-the-scenes operations that keep mines and miners working. His photographs reflect the beauty of the commonplace—the clothes of the miners, their dinner pails, and their tools—and reveal the picturesque remnants of closed mines: the weathered boards of company houses, the imposing iron beauty of an ancient tipple, and an abandoned building against the lowering sky of an approaching storm. Finally, his portraits of coal minersshow the strength, dignity, and enduring spirit of the men and women who work the southern Illinois coal mines.

AUTHOR BIOGRAPHY
C. William Horrell, 1918–1989, began his teaching career at Southern Illinois University in 1949, where he was instrumental in establishing the Department of Cinema and Photography. During Horrell’s lifetime, his photographs appeared in many major metropolitan newspapers and a variety of popular and specialty magazines, including Life, Pic, Youth, and Friends.
REVIEWS
“In cool documentary style, Horrell’s photos detail the miners, the methods, and the artifacts of Illinois coal. From giant surface shovels to self-propelled underground extractors, processing equipment, and abandoned mines, Horrell covered the coal fields.”—St. Louis Post-Dispatch
— -