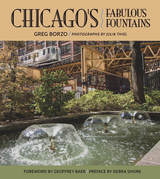 
Most people do not realize it, but Chicago is home to many diverse, artistic, fascinating, and architecturally and historically important fountains. In this attractive volume, Greg Borzo reveals more than one hundred outdoor public fountains of Chicago with noteworthy, amusing, or surprising stories about these gems. Complementing Borzo’s engagingly written text are around one hundred beautiful fine-art color photos of the fountains, taken by photographer Julia Thiel for this book, and a smaller number of historical photos.

Greg Borzo begins by providing an overview of Chicago’s fountains and discussing the oldest ones, explaining who built them and why, how they survived as long as they have, and what they tell us about early Chicago. At the heart of the book are four thematic chapters on drinking fountains, iconic fountains, plaza fountains, and park and parkway fountains. Among the iconic fountains described are Buckingham (in Grant Park), Crown (in Millennium Park), Centennial (with its water cannon shooting over the Chicago River), and two fountains designed by famed sculptor Lorado Taft (Time and Great Lakes). Plazas all around Chicago—in the neighborhoods as well as downtown—have fountains that anchor communities or enhance the skyscrapers they adorn. Also presented are the fountains in Chicago’s parks, some designed by renowned artists and many often overlooked or taken for granted. A chapter on the self-proclaimed City of Fountains, Kansas City, Missouri, shows how Chicago’s city planners could raise public awareness and funding for the care and preservation of these important landmarks. Also covered are a brief period of fountain building and rehabbing (1997–2002) that vastly enriched the city; fountains that no longer exist; and proposed Chicago fountains that were never built, as well as the future of fountain design.

A beautiful photography book and a guide to the city’s many fountains, Chicago’s Fabulous Fountains also provides fascinating histories and behind-the-scenes stories of these underappreciated artistic and architectural treasures of the Windy City.
AUTHOR BIOGRAPHY
Greg Borzo is an award-winning journalist, an editor, and the author of The Chicago “L,” Chicago Cable Cars, and other books about Chicago, where he has lived most of his life.
REVIEWS
“Is it possible that Chicagoans—residents of a river town with a glorious lakefront—are particularly drawn to water? As this book demonstrates, we certainly have a love affair with fountains. And this is the book fountain lovers have been waiting for. In his other books, Greg Borzo has demonstrated his obsession with digging for the telling details of the story, revealing fascinating facts about the Chicago ‘L,’ neighborhood lore best explored by bicycle, and the forgotten history of Chicago’s cable cars. In Chicago’s Fabulous Fountains, Borzo has done it again.”—Geoffrey Baer, Program Host and Producer, WTTW Channel 11 Chicago, from the Foreword

“Borzo gives us a sparkling tour of Chicago from an entirely new vantage point: its numerous fountains, both the celebrated and the uncharted. Even lifelong Chicagoans are in store for a rewarding trip to a shimmering side of the city they never fully knew. Here is the fascinating and little-known aquatic history and geography of the city, with all of its jets, sprays, and majestic geysers. In Borzo’s hands, Chicago springs to life in a whole new way.”—Thomas Frisbie, President, Society of Midland Authors

“With this book, Borzo has undertaken a worthy project, and we are all in his debt. He invites us to dip into and learn about Chicago’s history, neighborhoods, and character by getting to know better its outdoor public fountains.”—Debra Shore, Commissioner, Metropolitan Water Reclamation District of Greater Chicago, from the Preface

“More than a compilation of anecdotes, the chapters encompass diverse fountain types, their artists, creators, and benefactors, and the critical and public reactions to them, while also uncovering connections to the politics and politicians that have influenced this aquatic aspect of Chicago history. What exists today, what changed over time, and what once was are all documented with photos, interviews, and scholarly research. This is another worthy book by Borzo about a seldom recorded and discussed facet of Chicago history.”—Donna Primas, President, Chicago Tour-Guide Professionals Association

“Who knew that fountains live lives of drama! Some are cherished, and some are forgotten. Many have friends, but some have sworn enemies. Some are beautiful; some need a facelift. We move fountains; we discard fountains; we even lose fountains. A few lucky fountains get a comeback. Thanks to Greg Borzo, every time you see a fountain, you will wonder, ‘What’s its story?’”—Gary T. Johnson, President, Chicago History Museum

"Impressively informed and informative, "Chicago's Fabulous Fountains" is an inherently fascinating read from cover to cover and will aptly serve as an itinerary planning guide to Chicago's many and varied fountains. A unique and thoroughly 'reader friendly' survey, "Chicago's Fabulous Fountains" is unreservedly recommended for personal reading lists, as well as community and academic library collections."--Susan Bethany, Reviewer, Midwest Book Review


"Chicago’s Fabulous Fountains could have been titled The Precarious History of Chicago’s Fountains. for as this fascinating book reveals, for every Chicago fountain that was designed, placed in its intended location, and maintained for public enjoyment, there is one that has been dismantled, moved to an obscure site, or left to suffer in sad disrepair. One of the most interesting pieces of social history Borzo’s book reveals concerns drinking fountains. Today, we hardly think of a concrete block with a bubbler on top as a “fountain,” but when drinking fountains were first established, they had an entirely different social and aesthetic function." ---Stephanie Wilson Medlock, Windy City Reviews