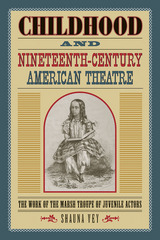 From 1855 until 1863, the Marsh Troupe of Juvenile Comedians, a professional acting company of approximately thirty children, entertained audiences with their nuanced performances of adult roles on stages around the globe. In Childhood and Nineteenth-Century American Theatre: The Work of the Marsh Troupe of Juvenile Actors, author Shauna Vey provides an insightful account not only of this unique antebellum stage troupe but also of contemporary theatre practices and the larger American culture, including shifts in the definition of childhood itself.

Looking at the daily work lives of five members of the Marsh Troupe—the father and manager, Robert Marsh, and four child performers, Mary Marsh, Alfred Stewart, Louise Arnot, and Georgie Marsh—Vey reveals the realities of the antebellum theatre and American society: the rise of the nineteenth-century impresario; the emerging societal constructions of girlhood and goodness; the realities of child labor;  the decline of the apprenticeship model of actor training; shifts in gender roles and the status of working women; and changes in the economic models of theatre production, including the development of the stock company system.

Both a microhistory of a professional theatre company and its juvenile players in the decade before the Civil War and a larger narrative of cultural change in the United States, Childhood and Nineteenth-Century American Theatre sheds light on how childhood was idealized both on and off the stage, how the role of the child in society shifted in the nineteenth century, and the ways economic value and sentiment contributed to how children were viewed.
AUTHOR BIOGRAPHY
Shauna Vey is an associate professor at New York City College of Technology, City University of New York, where she teaches theatre and communication courses. Her work has been published in Theatre History Studies and Theatre Survey.
REVIEWS
“Saved from the dustbin of history and brought center stage from a mere footnote, the Marsh Troupe of Juvenile Actors, unique in the history of juvenile performers during the transitional antebellum period, are given the due they much deserve in Shauna Vey’s superb study. After extensive research, Vey places the Marshes and their troupe in the context of theatrical practices of the day, and relates her findings to the phenomenon of juvenile players both before this time frame and since.”—Don B. Wilmeth, coeditor of The Cambridge History of American Theatre

“It is a rare scholar who takes the time to thoroughly research the nearly invisible true world of children in the entertainment industry. Shauna Vey has written well and wisely, and I learned much.”—Paul Petersen, actor on The Donna Reed Show and president emeritus of A Minor Consideration

“Set in an age when children worked but also when childhood was becoming the age of innocence, this record of child actors in mid-nineteenth-century America tells us much about both the history of the theatre and the transformation of youth, helping to make sense of the modern dilemma of child labor in the entertainment industry. This well-researched and delightfully written story should reach a wide audience.”—Gary Cross, Distinguished Professor of Modern History, Pennsylvania State University

"For scholars who seek better to understand the fraught history of child labour, especially child labour in the entertainment business, Vey’s Childhood and Nineteenth-Century American Theatre is a welcome addition." —Eleanor Huntington,  Childhood in the Past: An International Journal

"Shauna Vey’s meticulously researched book opens up the world of the Marsh Troupe for us. Melding social and cultural history, she investigates the working conditions of child actors and the larger context of cultural assumptions about and understandings of childhood as a phenomenon. Providing both close analysis of three of the leading performers in the troupe—Mary Marsh, Georgie Marsh, and Louise Arnot—she intertwines biographical details with an exploration of how these children fit into the personae available to young actors." —Sarah Chinn, Journal of Social History

"Ultimately, Vey persuades that this minor company is worthy of critical attention, dispelling any diminutive assumptions about the professional significance of a children's troupe. This company, Vey insists, made an important contribution to nineteenth—century American theater by training a substantial number of young actors and establishing a model for the juvenile of the next generation. Most significantly, she provides a fresh perspective on the experiences of touring professional actors, child performers, and antebellum children through her close focus on this previously overlooked troupe of children."-- Edel Lamb, Journal of the History of Childhood and Youth

"This study of child performers on the 19th-century American stage is a rare treat.  Thanks to her rigorous research, Vey (theater and communication, New York City College of Technology, CUNY) is able to provide a vivid picture of child actors in the pre-film days and also bring to life the rich atmosphere and rough-and-tumble nature of popular theater in a time of significant social transition.  Focusing on the Marsh Troupe of Juvenile Comedians, Vey effectively reveals changing attitudes about the exploitation of working children and the nature of an audience at that time drawn to romanticized images of the lives (and deaths) of children."--J. Fisher, University of North Carolina at Greensboro, CHOICE

"Vey’s extensive archival research—culled from newspapers, contracts, advertisements, grave markers, and census records—is the starting point for insightful contextualization and interpretation. The early chapters give an overview of the troupe’s history under the leadership of Robert Marsh, who founded the company starting with his own two children. Along the way, Vey offers detailed profiles of Marsh and four of the children. Each of these subjects figures a different manifestation of social, theatrical, and economic change."--Ryan Bunch, Rutgers University Camden, The Lion and the Unicorn

"In a cogent afterword, Vey adeptly synthesizes her main argument that historians need to acknowledge the professional labors and capable skills of all child actors, and to resist “our society’s inconsistent, and somewhat schizoid, view of childhood” (147). Although she contends that acting conditions and proverbial constructs of childhood “were changing” at this historical moment (143), her “distinct models” of the four Marsh children, together with analogous examples of other young theatre, film, and television actors, evidence a far more varied and realistic trajectory of childhood continuity. Ultimately, Vey’s remarkable text reminds us that the capitalist-driven labors of child actors deserve far more recognition, respect, and celebration."--Jeanne Klein, Unviersity of Kanas, reviewer for Theatre Journal

"Fortunatlety, Shauna Vey's work on the Marsh Troupe of Juvenile Comedians demonstrates very persuasively that we need to need to see child performers as part of a continuum of skilled nineteenth-century theatrical workers. Founded by Robert Guerineau Marsh in Philadelphia, the troupe lasted from 1855 until 1863, and comprised of approximately thrity child actors who performed adult material for audiences of a range of ages."--Cecilia Morgan, University of Toronto, Theatre Survey

"A recent addition to the renowned “Theater in the Americas” series published by Southern Illinois Press,
Childhood and Nineteenth-Century American Theatre is a model of superb scholarship. Vey’s book is required reading for scholars interested in American Studies, theatre history, and childhood studies."--Camille McCutcheon, University of South Carolina Upstate

1. Beginnings and Success
2. First Losses, and a Battle Won
3. A Perfect Angel—Forever
4. Chasing Audiences and Aging Out
5. Tomboys Rule
6. Fathers and Sons