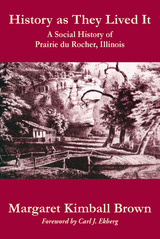 “His­tory as They Lived It deserves to be placed within the rich context of Illinois Country historiography going back more than a century. . . . It brings together the fully ripened thoughts of a mature scholar at the very moment that students of the Illinois Country need such a book.”—from the foreword by Carl J. Ekberg

Settled in 1722, Prairie du Rocher was at the geographic center of a French colony in the Mississippi Valley, which also included other villages in what is now Illinois and Missouri: Cahokia, Kaskaskia, Fort de Chartres, St. Philippe, Ste. Genevieve, and St. Louis.  Located in an alluvial valley near towering limestone bluffs, which inspired the village’s name—French for “prairie of the rock”— Prairie du Rocher is the only one of the seven French colonial villages that still exists today as a small compact community.

The village of Prairie du Rocher endured governance by France, Great Britain, Virginia, and the Illinois territory before Illinois became a state in 1818. Despite these changes, the villagers persisted in maintaining the community and its values. Margaret Kimball Brown looks at one of the oldest towns in the region through the lenses of history and anthropology, utilizing extensive research in archives and public records to give historians, anthropologists, and general readers a lively depiction of this small community and its people.

AUTHOR BIOGRAPHY
Margaret Kimball Brown earned a PhD in anthropology from Michigan State University in 1973. She served as site manager of Cahokia Mounds Historic Site from 1984 to 1998, where her work earned high honors and brought international fame to the Illinois landmark. She was staff archaeologist/chief archaeologist of the Illinois Department of Conservation from 1975 to 1984. After living in Prairie du Rocher for many years, she now resides in Red Bud.
TABLE OF CONTENTS
Cover
Title Page
Copyright
Contents
List of Tables, Figures and Maps
Foreword
Acknowledgments
Introduction
1. The French Regime: The Beginnings
2. Governance in the Illinois
3. Land, Life, and Labor
4. Prairie du Rocher Under the French Regime
5. Under Three Flags
6. Old and New
7. Becoming American
8. On Into a New Century
9. Present and Future
Appendix
Glossary
References
Index
A Shawnee Book. Also available in this series . . .
Back Cover