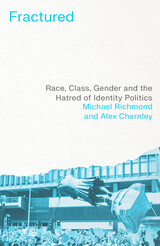 Identity politics has smeared political discourse for over a decade. The right uses it to lament the loss of free speech, while many on the left bemoan that it will be the end of class politics. It has been used to dismiss movements such as Black Lives Matter and brought seemingly progressive people into the path of fascism. It has armed the march of the transphobes.

In Fractured, the authors move away from the identity politics debate. Instead of crudely categorizing race, gender, and sexuality as 'identities', or forcing them under the heading of 'diversity', they argue that the interconnectedness of these groupings has always been inseparable from the history of class struggle under British and American capitalism.

Through an appraisal of pivotal historical moments in Britain and the US, and a sharp look at contemporary debates, the authors tame the frenzied culture war, offering a refreshing and reasoned way to understand how class struggle is formed and creating the possibilities for new forms of solidarity in an increasingly fractured world.

AUTHOR BIOGRAPHY
Michael Richmond was a co-editor of the Occupied Times and of Base Publication. He has written for publications including OpenDemocracy, New Socialist and Protocols. He tweets @Sisyphusa.

Alex Charnley was illustrator and co-editor of the Occupied Times and of Base Publication. He tweets @steinosteino.
REVIEWS
'An important and timely analysis rich in historical detail. It challenges crude denunciations of 'identity politics' on both right and left, and reiterates that intersectionality is indeed political economy'
Alison Phipps, Professor of Sociology at Newcastle University, author of ‘Me, Not You’


'Issues a powerfully argued appeal to the left to finally understand that “Prioritising solidarity for those most marginalised or under attack is not about guilt or charity or ‘virtue-signalling’. It is part of what can get everyone free”’
Sophie Lewis, author of 'Full Surrogacy Now: Feminism Against Family' and 'Abolish The Family: A Manifesto For Care and Liberation'


'This sharp, thoughtful, generous little book helps us see the many roads that lead to better worlds, arguing that to get there we need to abandon those noisy, nasty, noxious debates on “identity politics”. It clears ground, carefully tracing histories of resistance and reaction, reminding us that the working class is and always has been manifold - and therein lies our strength'
Luke de Noronha, academic and writer at the Sarah Parker Remond Centre, University College London and author of 'Deporting Black Britons: Portraits of Deportation to Jamaica' and co-author, with Gracie Mae Bradley, of 'Against Borders: The Case For Abolition'