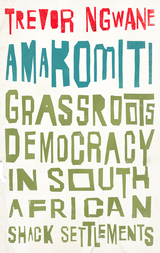 BUY
Amakomiti: Grassroots Democracy in South African Shack Settlements
by Trevor Ngwane
Pluto Press, 2021
Cloth: 978-0-7453-4199-6
Can people who live in shantytowns, shacks and favelas teach us anything about democracy? About how to govern society in a way that is inclusive, participatory and addresses popular needs? This book argues that they can. In a study conducted in dozens of South Africa's shack settlements, where more than 9 million people live, Trevor Ngwane finds thriving shack dwellers' committees that govern local life, are responsive to popular needs and provide a voice for the community. These committees, called 'amakomiti' in the Zulu language, organize the provision of basic services such as water, sanitation, public works and crime prevention. Democracy on the Margins argues that, contrary to common perception, slum dwellers are in fact an essential part of the urban population, whose political agency must be recognized and respected. In a world searching for democratic alternatives that serve the many and not the few, it is to the shantytowns, rather than the seats of political power, that we should turn.
AUTHOR BIOGRAPHY
Trevor Ngwane is a scholar activist who spent twenty years as a full-time organiser in South African trade unions, community organisations and social movements before and after the defeat of apartheid. He later obtained his PhD in Sociology at the University of Johannesburg where he now teaches and conducts research.
TABLE OF CONTENTS