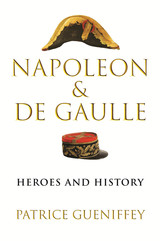 An Australian Book Review Best Book of the Year

One of France’s most famous historians compares two exemplars of political and military leadership to make the unfashionable case that individuals, for better and worse, matter in history.

Historians have taught us that the past is not just a tale of heroes and wars. The anonymous millions matter and are active agents of change. But in democratizing history, we have lost track of the outsized role that individual will and charisma can play in shaping the world, especially in moments of extreme tumult. Patrice Gueniffey provides a compelling reminder in this powerful dual biography of two transformative leaders, Napoleon Bonaparte and Charles de Gaulle.

Both became national figures at times of crisis and war. They were hailed as saviors and were eager to embrace the label. They were also animated by quests for personal and national greatness, by the desire to raise France above itself and lead it on a mission to enlighten the world. Both united an embattled nation, returned it to dignity, and left a permanent political legacy—in Napoleon’s case, a form of administration and a body of civil law; in de Gaulle’s case, new political institutions. Gueniffey compares Napoleon’s and de Gaulle’s journeys to power; their methods; their ideas and writings, notably about war; and their postmortem reputations. He also contrasts their weaknesses: Napoleon’s limitless ambitions and appetite for war and de Gaulle’s capacity for cruelty, manifested most clearly in Algeria.

They were men of genuine talent and achievement, with flaws almost as pronounced as their strengths. As many nations, not least France, struggle to find their soul in a rapidly changing world, Gueniffey shows us what a difference an extraordinary leader can make.


Written in a classic, limpid, and lively style, this remarkable book is the result of decades of reading and thinking by a pure historian. Patrice Gueniffey is one of the world’s leading specialists of the French Revolution and of Napoleon’s life, meteoric career, and legacy. Strikingly, such a deep and extensive competence extends to Charles de Gaulle’s time, politico-military career, and memory as well. With the aid of the two formidable figures of Napoleon and de Gaulle, Gueniffey endeavors to analyze why great men hold such a powerful position in history.
-- Guillaume Piketty, Sciences Po, Paris


This book will become a landmark…In Napoleon and de Gaulle, Patrice Gueniffey compares the fates of these ‘two French heroes.’ [He] does not stop at the fascinating relationship of these two men with politics and war. In an admirably fluid and clear style, he delves rigorously and methodically into the twists and turns of these two men’s lives: their formative years as soldiers, their forced exiles, their triumphant ‘returns,’ their bitter departures.
-- Jean-Christophe Buisson Le Figaro Magazine


Gueniffey has produced a masterful work. The French historian knows how to admire without succumbing to hagiography, and to compare without conflating differences…Not since François Furet has France seen a historian so gifted and alert to the issues that matter. Furet thought that the age of heroism was perhaps behind us. But after reading Gueniffey’s sparkling book, it is wise to bet on the endurance of heroes and heroism.
-- Daniel J. Mahoney City Journal


In this erudite book, Patrice Gueniffey has had the interesting idea of comparing the careers and the myths of these two legendary figures. And there is a nice symmetry to their stories.
-- Julian Jackson The Spectator


Illuminating…showing why the French are drawn time and again to ‘great men’ (and the odd slip of a saint). The heady, lordly prose reminds me of Carlyle—or superior fiction.
-- Australian Book Review


As brilliant as it is powerful…This is both a work of history and a bleak criticism of our present times. Superbly written, it’s a pessimistic and sarcastic book and is, for that very reason, uplifting.
-- Marc Riglet Lire


This book does not limit itself to the kind of banal comparison that is so often sketched between these two French heroes. Through his sharp analysis, [Gueniffey] attempts to offer a political portrait of [France], which…has not yet come to terms with having cut off the head of its king.
-- Jacques de Saint Victor Le Figaro


A book about the forceful power of will in history…[A] lively, discerning study.
-- Library Journal (starred review)


A wide-ranging historical essay on history, heroes, and how they shaped the events of their times…Gueniffey pulls no punches in his perceptive and wide-ranging book…This book is not an ode to despair. It is rather an appreciation of the imaginative aspect of history to move men and women to acts of greatness.
-- Patrick J. Walsh Chronicles

TABLE OF CONTENTS
Cover
Title Page
Copyright
Epigraph
Contents
Preface to the English-Language Edition
Introduction
1. Two Comebacks
2. The Place of Great Men
3. The Best among Us?
4. The Pen and the Sword
5. The Heroes’ Sepulcher
Notes
Works Cited
Index