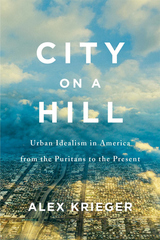 A sweeping history of American cities and towns, and the utopian aspirations that shaped them, by one of America’s leading urban planners and scholars.

The first European settlers saw America as a paradise regained. The continent seemed to offer a God-given opportunity to start again and build the perfect community. Those messianic days are gone. But as Alex Krieger argues in City on a Hill, any attempt at deep understanding of how the country has developed must recognize the persistent and dramatic consequences of utopian dreaming. Even as ideals have changed, idealism itself has for better and worse shaped our world of bricks and mortar, macadam, parks, and farmland. As he traces this uniquely American story from the Pilgrims to the “smart city,” Krieger delivers a striking new history of our built environment.

The Puritans were the first utopians, seeking a New Jerusalem in the New England villages that still stand as models of small-town life. In the Age of Revolution, Thomas Jefferson dreamed of citizen farmers tending plots laid out across the continent in a grid of enlightened rationality. As industrialization brought urbanization, reformers answered emerging slums with a zealous crusade of grand civic architecture and designed the vast urban parks vital to so many cities today. The twentieth century brought cycles of suburban dreaming and urban renewal—one generation’s utopia forming the next one’s nightmare—and experiments as diverse as Walt Disney’s EPCOT, hippie communes, and Las Vegas.

Krieger’s compelling and richly illustrated narrative reminds us, as we formulate new ideals today, that we chase our visions surrounded by the glories and failures of dreams gone by.

REVIEWS
Provides us with a useful history of the influential ideals—some of them prophetic, some of them unrealistic, and others downright cruel and unjust—that have shaped American cities.
-- Shlomo Angel Wall Street Journal


City on a Hill takes us on a bold, comprehensive journey through the history of American city planning—or rather a history of the American built environment, due to the anti-urban bias that has historically been pinned to American culture…In a time where the future looks darker than ever, Alex Krieger reminds us of how utopian dreams once galvanized American (city planning) history, and shows that our current worries—rather than dreams—require new utopias to be imagined.
-- ArchDaily


From the Puritans via Jefferson, from millions of immigrants to the hippies and on through the builders of World’s Fairs, Epcot and Las Vegas, each generation has seen America as a utopia, a promised land. But each time those utopias have either ingrained privilege, failed utterly or proved the next generation’s nightmare. This is an extremely readable journey through the successive waves of building that exceptionalist place.
-- Financial Times


[A] carefully argued and cinematically sweeping history…In a field crowded with detailed histories of this kind, the book stands out as an invigorating study, rich in the history of ideas about what American urban settlements might have been and still may become.
-- Norman Weinstein Architectural Record


A critically deep dive into the visions of utopia that have shaped American development, City on a Hill outlines the idealisms underlying various urban design movements, starting with the first wave of pilgrims looking for a new start. Krieger honors the grand ideas that have moved America and its cities forward over the centuries but also underwrites with a critical eye the lessons that can be learned as we move forward towards contemporary ideals of sustainability and smart cities today.
-- Architect’s Newspaper


Alex Krieger has written a classic. City on a Hill is a challenge to our country to reject mediocrity for aspiration. It should be taught in every school of planning and design in America and it belongs in the library of every citizen who passionately cares about the beauty, diversity, and livability of our country’s towns and cities.
-- Joseph P. Riley, 10-term mayor of Charleston, South Carolina, and cofounder of the Mayors’ Institute on City Design


Alex Krieger offers a lively and highly readable account of how, from the colonial era onward, Americans’ utopian dreams have shaped our cities and can today provide hope for a more just, sustainable, and beautiful future. It is a most welcome view of a persistent strain of aspiration and optimism in our national life.
-- Drew Faust, President Emerita, Harvard University


In City on a Hill, Krieger brilliantly demolishes the myth that the ideals of America are somehow rooted in the countryside and disconnected from our cities. He has written not just a history of American urbanism but a history of our attitudes toward cities, reminding us how profoundly our cities, for all their failings, reflect our aspirations. It is a story he tells with such richness and nuance that this book becomes, for all intents and purposes, a history of America itself.
-- Paul Goldberger, architecture critic and author of Ballpark: Baseball in the American City


Panoramic, original, and insightful, City on a Hill is a genuine achievement, and reflects and embodies Krieger’s decades-long involvement both with urban design and American urban history. This book deserves to be the most widely read comprehensive history of the American city.
-- Robert Fishman, Taubman College of Architecture and Urban Planning, University of Michigan


With vivid, clear prose and striking and complementary images, City on a Hill is a fantastic, comprehensive account of utopian visions in American city planning.
-- Frederick Steiner, University of Pennsylvania