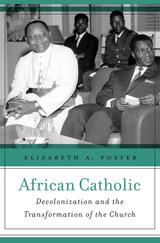 A groundbreaking history of how Africans in the French Empire embraced both African independence and their Catholic faith during the upheaval of decolonization, leading to a fundamental reorientation of the Catholic Church.

African Catholic examines how French imperialists and the Africans they ruled imagined the religious future of French sub-Saharan Africa in the years just before and after decolonization. The story encompasses the political transition to independence, Catholic contributions to black intellectual currents, and efforts to alter the church hierarchy to create an authentically “African” church.

Elizabeth Foster recreates a Franco-African world forged by conquest, colonization, missions, and conversions—one that still exists today. We meet missionaries in Africa and their superiors in France, African Catholic students abroad destined to become leaders in their home countries, African Catholic intellectuals and young clergymen, along with French and African lay activists. All of these men and women were preoccupied with the future of France’s colonies, the place of Catholicism in a postcolonial Africa, and the struggle over their personal loyalties to the Vatican, France, and the new African states.

Having served as the nuncio to France and the Vatican’s liaison to UNESCO in the 1950s, Pope John XXIII understood as few others did the central questions that arose in the postwar Franco-African Catholic world. Was the church truly universal? Was Catholicism a conservative pillar of order or a force to liberate subjugated and exploited peoples? Could the church change with the times? He was thinking of Africa on the eve of Vatican II, declaring in a radio address shortly before the council opened, “Vis-à-vis the underdeveloped countries, the church presents itself as it is and as it wants to be: the church of all.”

REVIEWS
A truly original exploration of African Christianity, and of Catholics’ engagement with Africa, during the late colonial age and early era of independence. Foster reveals the fissures emerging among Catholics—French and African—during decolonization, and offers a groundbreaking intervention on Catholic negritude, including a fascinating discussion of Alioune Diop as one of its unsung architects. African Catholic will attract readers interested in Africa, Europe, and the francophone world as well as in religious studies. I strongly recommend it.
-- Eric Jennings, University of Toronto


Foster is one of a small but growing number of historians of French colonialism to give religion its due, and she stands almost alone in her focus on the diversity and complexity of African religious life. In her excellent new book, she zeroes in on the evolution of Catholicism in francophone West Africa and among African students, clerics, and intellectuals in France. Her work brims with fresh perspectives and new insights, including her arresting findings on the extent to which African independence influenced Vatican II. The French need for African priests today stands as one of many delicious ironies in this immensely compelling book.
-- Edward Berenson, New York University


A new interpretation of the decolonization and transformation of African Catholicism in the post–World War II years before and after the Second Vatican Council…Foster tells a compelling story…This is an important and authoritative book.
-- Stan Chu Ilo Modern Theology


An outstanding study of Catholicism during the tumultuous period of decolonization…It offers engaging analyses on a striking range of subjects, including an assessment of Alioune Diop’s Catholic contribution to Négritude, the quotidian crises of faith experienced by radicalized African Catholic students in postwar France, and the way in which Catholics, from local churches to the upper echelons of the hierarchy, grappled with the growth of Islam in Africa.
-- J. P. Daughton Journal of Modern History


Succeeds masterfully at probing the uncertainties and high stakes of competing efforts to shape the future of the Catholic Church in the midst of decolonization.
-- Harry Gamble American Historical Review