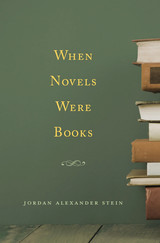 A literary scholar explains how eighteenth-century novels were manufactured, sold, bought, owned, collected, and read alongside Protestant religious texts. As the novel developed into a mature genre, it had to distinguish itself from these similar-looking books and become what we now call “literature.”

Literary scholars have explained the rise of the Anglophone novel using a range of tools, from Ian Watt’s theories to James Watt’s inventions. Contrary to established narratives, When Novels Were Books reveals that the genre beloved of so many readers today was not born secular, national, middle-class, or female.

For the first three centuries of their history, novels came into readers’ hands primarily as printed sheets ordered into a codex bound along one edge between boards or paper wrappers. Consequently, they shared some formal features of other codices, such as almanacs and Protestant religious books produced by the same printers. Novels are often mistakenly credited for developing a formal feature (“character”) that was in fact incubated in religious books.

The novel did not emerge all at once: it had to differentiate itself from the goods with which it was in competition. Though it was written for sequential reading, the early novel’s main technology for dissemination was the codex, a platform designed for random access. This peculiar circumstance led to the genre’s insistence on continuous, cover-to-cover reading even as the “media platform” it used encouraged readers to dip in and out at will and read discontinuously. Jordan Alexander Stein traces this tangled history, showing how the physical format of the book shaped the stories that were fit to print.

REVIEWS
Granting publishers equal billing with authors and paying as much attention to buying habits as to reading practices, [Stein] coordinates the history of the novel with ‘the development of the book as a media platform.’…While Watt celebrated a genre bursting free from the stale conventions of epic and romance, Stein casts the novel itself as the fixed point against which modern devotional genres began to emerge.
-- Leah Price New York Review of Books


Crisp, refreshing…A clarifying, pleasurable read, one that offers a model for how attention to a period’s larger media ecology can unstick adherence to anachronistic categories.
-- Annika Mann Eighteenth-Century Fiction


Compact and erudite…This is clearly a pathfinding book, transatlantic in scope and clear in its focus. It usefully reframes the novel as one print-based mechanism in the emergence of modern selfhood…Readers, therefore, will welcome this careful, innovative study as an important reminder that the novel’s rise, including even its most cherished formal features, did not happen merely to meet the demand of a new middle-class readership but was the effect also of calculated transformations in the incipient book publishing industry.
-- Sean Silver Modern Language Quarterly


[An] erudite work…His analysis of the interconnectedness of pious writings and fiction is thoughtful and astute, and illuminates tensions in both Defoe’s and Richardson’s work…Impressive for both the extent of its research and the lucidity of its prose.
-- Hal Gladfelder Review of English Studies


An impressive attempt to bring together book history and literary history…A refreshing, succinct, and striking new account of how and why the novel achieved literary hegemony over the course of the eighteenth century…[An] innovative work.
-- David Womersley Studies in English Literature


Jordan Alexander Stein has recovered a print world in which secular and religious texts were bought, sold, and read interchangeably with one another on both sides of the Atlantic, and the novel’s formal features developed in tandem with the material affordances of the book. The result is an entirely new account of the novel: no longer the harbinger of secular modernity, the novel is, Stein shows us, the residue of what religious writings left behind.
-- Amanda Claybaugh, author of The Novel of Purpose


In this original and erudite study, Jordan Alexander Stein brings fresh insight to an enduring subject in literary studies—the rise of the novel. Redirecting our attention from old modes of genre history to new modes of media history, he argues that eighteenth-century Anglo-Americans learned to read novelistically—and to read for character—within a distinct media ecology. Stein’s reconstruction of that learning process will transform how we assess the relations among fiction, print culture, and practices of reading.
-- Deidre Lynch, author of The Economy of Character


By revealing how a modern genre emerged from changes in format, not just form, Jordan Alexander Stein restores early novels like Robinson Crusoe and Pamela to a common shelf alongside other books—conversion narratives, spiritual biographies, and the confessions of penitent sinners—that shared the same material dimensions. What mattered most about early English novels, Stein shows us, was not that they were secular or fictional; it was that they were books telling stories about someone’s vulnerability. The crucial figure in the rise of the novel—the imagined person who came to be known as a ‘character’—was no rational, self-possessing hero but a divided, broken self, in danger and beset by doubt. When Novels Were Books is a major contribution to book history and, even better, a gift to our thinking about what books mean and why we care about them.
-- Caleb Smith, author of The Oracle and the Curse


Takes aim at literary common sense, asking scholars to look again and aslant at novels and the stories they tell about them…Filled with revisionist insights…An alacritous, perceptive study that presses hard on shibboleths. It elicits surprise and nurtures new forms of wonder.
-- Sonia Hazard Studies in the Novel


[A] contribution to the historiography of the rise of the novel and a challenge to the enterprise as a whole.
-- Julianne Werlin Novel


Stein’s fundamental project is to revise the ‘rise of the novel’ narrative by examining print’s role as both a technology and a business, while attending to its powerful social dimensions. He offers a professedly revisionary account that challenges ideologically driven versions of the story, including those tying the novel to the emergence of secular modernity.
-- Sandra M. Gustafson American Literary History