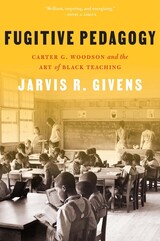 “As departments…scramble to decolonize their curriculum, Givens illuminates a longstanding counter-canon in predominantly black schools and colleges.”
—Boston Review

“Fascinating, and groundbreaking. Givens restores Carter G. Woodson, one of the most important educators and intellectuals of the twentieth century, to his rightful place alongside figures like W. E. B. Du Bois and Ida B. Wells.”
—Imani Perry, author of May We Forever Stand: A History of the Black National Anthem

Black education was subversive from its inception. African Americans pursued education through clandestine means, often in defiance of law and custom, even under threat of violence. They developed what Jarvis Givens calls a tradition of “fugitive pedagogy”—a theory and practice of Black education epitomized by Carter G. Woodson—groundbreaking historian, founder of Black History Month, and legendary educator under Jim Crow.

Givens shows that Woodson succeeded because of the world of Black teachers to which he belonged. Fugitive Pedagogy chronicles his ambitious efforts to fight what he called the “mis-education of the Negro” by helping teachers and students to see themselves and their mission as set apart from an anti-Black world. Teachers, students, families, and communities worked together, using Woodson’s materials and methods as they fought for power in schools. Forged in slavery and honed under Jim Crow, the vision of the Black experience Woodson articulated so passionately and effectively remains essential for teachers and students today.

REVIEWS
Through meticulous research, Givens has reconstructed the radical historical methods, teaching ethic, and writings of Carter G. Woodson; his book is a long-overdue labor of love and analysis…I have nothing but admiration for this outstanding contribution to the history and theory of Black education…A tremendous offering and one that would make Woodson, the ever-rigorous teacher, proud.
-- Randal Maurice Jelks Los Angeles Review of Books


Takes the case of historian and ‘father of black history’ Carter G. Woodson as a prism to uncover a dissenting tradition of American learning, in the history, theory, and practice of black educators…As departments and disciplines today scramble to decolonize their curriculum, Givens illuminates a longstanding counter-canon in predominantly black schools and colleges.
-- Victoria Baena Boston Review


Fugitive Pedagogy advances the history of black education into new territory. Givens unveils a far more complex portrait of Carter G. Woodson than we have seen, one of a scholar influenced by, and interconnected with, other educators. He rightly situates Woodson as part of a larger network of advocacy and pedagogy, in which the vision and practice for revisioning African American education are collaborative.
-- Vanessa Siddle Walker, author of The Lost Education of Horace Tate


Eloquently written, brilliantly argued, and rigorously researched, Fugitive Pedagogy creatively explores the fascinating educational experiences, work, and philosophy of Carter G. Woodson, ‘The Father of Black History,’ as well as the worldviews and contributions of a group of under-acknowledged African American teachers during the era of Jim Crow segregation. Givens’ portrayal of the ‘art of teaching in the Black experience’ is refreshing and trailblazing. This wide-reaching book is a major contribution to the scholarship on the history of the early Black history movement.
-- Pero G. Dagbovie, author of Reclaiming the Black Past: The Use and Misuse of African American History in the 21st Century


Fugitive Pedagogy is a brilliant, inspiring, and energizing book that reclaims the narratives of critique and hope that fueled the deep grammar of pedagogical struggle that unfolded in both the experiences and narratives of Black educators in the beginning of the twentieth century and beyond. Written in a discourse that is critical, poetic, and inspiring, Givens not only unearths a hidden history of educational struggle, he also offers educators a resource for rethinking the meaning and purpose of education and pedagogical struggle as tools of enlightenment, struggle, and racial justice.
-- Henry A. Giroux, author of Race, Politics, and Pandemic Pedagogy: Education in a Time of Crisis


Jarvis Givens’s Fugitive Pedagogy is a brilliant, fascinating, and groundbreaking text. Givens restores Carter G. Woodson, one of the most important educators and intellectuals of the twentieth century, to his rightful place alongside figures like W. E. B. Du Bois and Ida B. Wells. Woodson was unrivaled as a key architect of Black Studies and one of the earliest Black public intellectuals. In this transformative work, Givens rigorously examines critical pedagogy as an essential element in the Black intellectual tradition and, indeed, one situated at the very heart of Black Studies from its beginnings.
-- Imani Perry, author of May We Forever Stand: A History of the Black National Anthem


Informative and inspiring…a significant contribution of the history of Black education in the United States…An homage to the achievement of an often-forgotten racial pioneer.
-- Glenn C. Altschuler Florida Courier

TABLE OF CONTENTS
Cover
Title Page
Copyright
Contents
Preface: A New Grammar for Black Education
Introduction: Blackness and the Art of Teaching
1. Between Coffle and Classroom: Carter G. Woodson as a Student and Teacher, 1875–1912
2. “The Association . . . Is Standing Like the Watchman on the Wall”: Fugitive Pedagogy and Black Institutional Life
3. A Language We Can See a Future In: Black Educational Criticism as Theory in Its Own Right
4. The Fugitive Slave as a Folk Hero in Black Curricular Imaginations: Constructing New Scripts of Knowledge
5. Fugitive Pedagogy as a Professional Standard: Woodson’s “Abroad Mentorship” of Black Teachers
6. “Doomed to Be Both a Witness and a Participant”: The Shared Vulnerability of Black Students and Black Teachers
Conclusion: Black Schoolteachers and the Origin Story of Black Studies
Notes
Acknowledgments
Index