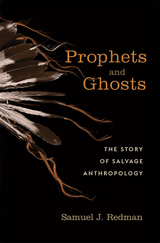 A searching account of nineteenth-century salvage anthropology, an effort to preserve the culture of “vanishing” Indigenous peoples through dispossession of the very communities it was meant to protect.

In the late nineteenth century, anthropologists, linguists, archaeologists, and other chroniclers began amassing Indigenous cultural objects—crafts, clothing, images, song recordings—by the millions. Convinced that Indigenous peoples were doomed to disappear, collectors donated these objects to museums and universities that would preserve and exhibit them. Samuel Redman dives into the archive to understand what the collectors deemed the tradition of the “vanishing Indian” and what we can learn from the complex legacy of salvage anthropology.

The salvage catalog betrays a vision of Native cultures clouded by racist assumptions—a vision that had lasting consequences. The collecting practice became an engine of the American museum and significantly shaped public education and preservation, as well as popular ideas about Indigenous cultures. Prophets and Ghosts teases out the moral challenges inherent in the salvage project. Preservationists successfully maintained an important human inheritance, sometimes through collaboration with Indigenous people, but collectors’ methods also included outright theft. The resulting portrait of Indigenous culture reinforced the public’s confidence in the hierarchies of superiority and inferiority invented by “scientific” racism.

Today the same salvaged objects are sources of invaluable knowledge for researchers and museum visitors. But the question of what should be done with such collections is nonetheless urgent. Redman interviews Indigenous artists and curators, who offer fresh perspectives on the history and impact of cultural salvage, pointing to new ideas on how we might contend with a challenging inheritance.

REVIEWS
A must-read for anyone seeking to confront racist worldviews and make the world a better place for all.
-- Paulette Steeves Science


Redman tells the grim story of decades-long elite capture of Native cultures, while the US government and expansionist industries gained control of lands and waters from sea to sea. Decolonization requires recognition of the colonization process, and Redman’s book is a landmark contribution to that effort.
-- Barbara Miller American Anthropologist


A sweeping overview of the history and continued legacy of salvage anthropology in the United States…Redman’s work connects the complex histories of these practices to their ongoing implications for museums today, offering a major contribution to how we recognize their legacies for today’s efforts to decolonize collections, repatriate objects, and forge community partnerships.
-- Reed Gochberg American Nineteenth Century History


Prophets and Ghosts is a rich and eye-opening book, and Redman does not shy away from taking a hard look at the troubled and troubling legacy of salvage anthropology. It’s deeply researched, beautifully written—a real pleasure to read.
-- Lukas Rieppel New Books Network


Redman nuances the history of salvage anthropology…[and] recounts the stories of individual collectors, humanizing these anthropologists, Indian agents, missionaries, and Native people, while stressing the seriousness and urgency of their often-obsessive collecting practices.
-- Klinton Burgio-Ericson Journal of Anthropological Research


Redman has not only become anthropology’s leading historian but also its conscience. Through methodical research and insightful analysis, Prophets and Ghosts provides a window into the motives and practices of ‘salvaging’ cultures often assumed to be on the precipice of destruction. It reveals all the disciplinary successes and failures—and moral contradictions and paradoxes—in this moment that laid the groundwork for how the world thinks of cultures and Indigenous peoples. This is a history that is still resonant today.
-- Chip Colwell, author of Plundered Skulls and Stolen Spirits: Inside the Fight to Reclaim Native America’s Culture


An original, masterful work on a rich and important topic. Redman looks at the idea of salvage as both preservation and as part of a larger cultural phenomenon—the establishment of a diverse cultural history for the nation—with all the implications this had for the Indigenous peoples being studied and ‘saved.’
-- Nancy J. Parezo, coauthor of Anthropology Goes to the Fair: The 1904 Louisiana Purchase Exposition


Redman interrogates the origins of salvage anthropology by delving into the resonance of encounters and collections that, reflecting an emphasis on preservation at all costs, still haunt us today. He effectively exposes the entanglements among nationalistic impulses, colonial nostalgia, and assimilationist policies that shaped museum representations of the Indigenous well into the mid-twentieth century.
-- Margaret M. Bruchac, author of Savage Kin: Indigenous Informants and American Anthropologists


This book is a gem! Redman traces the nineteenth-century salvage anthropology movement in the United States, designed to preserve the material culture of Native Americans portrayed on the verge of extinction. Especially important are the many negative consequences of this movement, which last to this day.
-- Laura Nader, author of Laura Nader: Letters to and from an Anthropologist


The ‘salvage’ of all things Indian was driven by scientific curiosity, but Redman shows how that curiosity was also driven by an insatiable obsession with objects rather than the people who produced them. This book provides a broad, often troubling, picture behind the impetus to collect everything before the Indians ‘vanished.’
-- Joe Watkins, author of Indigenous Archaeology: American Indian Values and Scientific Practice


Redman offers an impressive exploration of the strange history of salvage anthropology and its efforts to document Native cultures before their presumed disappearance before the forward march of history. With its detailed archival findings, clear writing, and comprehensive analysis, Prophets and Ghosts is a fine piece of scholarship.
-- Orin Starn, author of Ishi’s Brain: In Search of America’s Last “Wild” Indian