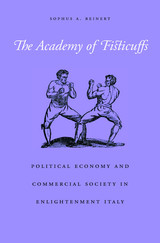 The terms “capitalism” and “socialism” continue to haunt our political and economic imaginations, but we rarely consider their interconnected early history. Even the eighteenth century had its “socialists,” but unlike those of the nineteenth, they paradoxically sought to make the world safe for “capitalists.” The word “socialists” was first used in Northern Italy as a term of contempt for the political economists and legal reformers Pietro Verri and Cesare Beccaria, author of the epochal On Crimes and Punishments. Yet the views and concerns of these first socialists, developed inside a pugnacious intellectual coterie dubbed the Academy of Fisticuffs, differ dramatically from those of the socialists that followed.

Sophus Reinert turns to Milan in the late 1700s to recover the Academy’s ideas and the policies they informed. At the core of their preoccupations lay the often lethal tension among states, markets, and human welfare in an era when the three were becoming increasingly intertwined. What distinguished these thinkers was their articulation of a secular basis for social organization, rooted in commerce, and their insistence that political economy trumped theology as the underpinning for peace and prosperity within and among nations.

Reinert argues that the Italian Enlightenment, no less than the Scottish, was central to the emergence of political economy and the project of creating market societies. By reconstructing ideas in their historical contexts, he addresses motivations and contingencies at the very foundations of modernity.

REVIEWS
In this erudite and engaging intellectual history, Reinert makes the case for the critical role played by a pioneering group of Italian political economists [in the Enlightenment].
-- Andrew Moravcsik Foreign Affairs


A tour de force through economic history and thought. With staggering scholarly depth, The Academy of Fisticuffs is a rare work that will set the standard for economic and political history. Reinert is a prodigy.
-- Jacob Soll, University of Southern California


The Academy of Fisticuffs is a tremendous achievement. Reinert has created a study of the Milanese enlightenment which is entirely unique—he builds on the work of previous historians and gathers together a range of archival and printed sources, but he also explores and challenges current themes in cultural history and therefore places the Milanese enlightenment within a much broader historiographical framework.
-- Melissa Calaresu, University of Cambridge


In a captivating book with unexpected connections at every turn, Sophus Reinert reveals that the Enlightenment science of political economy was about much more than money and markets. It was a fraught effort to understand the conditions of human coexistence, to figure out what it would take for neighbors and nations to get along. A dramatic and deeply human tale about coffeehouses and prisons, romantic entanglements and roadside bandits, mathematical models and modern warfare, The Academy of Fisticuffs challenges us to rethink the boundaries and aspirations of economic thought—both in the past and today. Truly transformative scholarship.
-- William Deringer, Massachusetts Institute of Technology


A milestone in the deep renewal of the history of political economy, The Academy of Fisticuffs is ambitiously and imaginatively conceived, creatively and rigorously researched, robustly and cogently argued, and gracefully written. With erudition and ingenuity, Reinert offers a bold and original reading of political economy with sweeping implications for our understanding of the Economic Enlightenment everywhere in Europe and across the Atlantic.
-- Steven Kaplan, Cornell University


Magisterial…Both impeccably and exhaustively researched, as well as splendidly written: it synthesizes a tremendous amount of material about its protagonists; brims with aptly chosen evidence from their texts, both published and archival; and relates numerous details about their lives, from the strictly institutional to the deeply personal, with the greatest eloquence, brio, and flair, making its intellectual biographies not only tremendously informative but also a great pleasure to read. This erudite study will therefore make an important contribution to the anglophone field of Italian studies, and it will doubtless enrich our picture of the European Enlightenment.
-- Barbara Naddeo Journal of Modern History