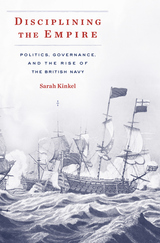 “Rule Britannia! Britannia rule the waves,” goes the popular lyric. The fact that the British built the world’s greatest empire on the basis of sea power has led many to assume that the Royal Navy’s place in British life was unchallenged. Yet, as Sarah Kinkel shows, the Navy was the subject of bitter political debate. The rise of British naval power was neither inevitable nor unquestioned: it was the outcome of fierce battles over the shape of Britain’s empire and the bonds of political authority.

Disciplining the Empire explains why the Navy became divisive within Anglo-imperial society even though it was also successful in war. The eighteenth century witnessed the global expansion of British imperial rule, the emergence of new forms of political radicalism, and the fracturing of the British Atlantic in a civil war. The Navy was at the center of these developments. Advocates of a more strictly governed, centralized empire deliberately reshaped the Navy into a disciplined and hierarchical force which they hoped would win battles but also help control imperial populations. When these newly professionalized sea officers were sent to the front lines of trade policing in North America during the 1760s, opponents saw it as an extension of executive power and military authority over civilians—and thus proof of constitutional corruption at home.

The Navy was one among many battlefields where eighteenth-century British subjects struggled to reconcile their debates over liberty and anarchy, and determine whether the empire would be ruled from Parliament down or the people up.

REVIEWS
Disciplining the Empire is a piece of superb research. Kinkel fills a historiographical gap that many scholars, even those working in the field, probably have no idea exists. There is no comparable work on the British navy.
-- Denver Brunsman, author of The Evil Necessity: British Naval Impressment in the Eighteenth-Century Atlantic World


Impressively researched and well-written, Disciplining the Empire is an important, compelling book, not least because it emphasizes very clearly just how integrated the Royal Navy was into broader political discussions. It successfully contextualizes military concerns into a larger imperial framework, which had global implications as Britain became a world power in the eighteenth century.
-- Abigail Swingen, author of Competing Visions of Empire: Labor, Slavery, and the Origins of the British Atlantic Empire


A highly original approach to an important topic, this well-researched study throws fresh light on the emergence of British naval hegemony. Disciplining the Empire offers a skillful blending of power politics ideology and naval and imperial history that is significant for American colonial as well as British history.
-- Jeremy Black, author of Naval Power: A History of Warfare and the Sea from 1500 onwards


Kinkel’s exciting and savvy account of the Royal Navy gives flesh to its status as the long arm of the pugnacious British state, while also making clear that it was an arm that punched back, shaping that state’s global designs and domestic strategies for rule. An impressive professional debut!
-- Kathleen Wilson, author of The Sense of the People: Politics, Culture and Imperialism in England, 1715–1785