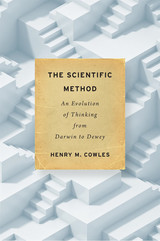 The surprising history of the scientific method—from an evolutionary account of thinking to a simple set of steps—and the rise of psychology in the nineteenth century.

The idea of a single scientific method, shared across specialties and teachable to ten-year-olds, is just over a hundred years old. For centuries prior, science had meant a kind of knowledge, made from facts gathered through direct observation or deduced from first principles. But during the nineteenth century, science came to mean something else: a way of thinking.

The Scientific Method tells the story of how this approach took hold in laboratories, the field, and eventually classrooms, where science was once taught as a natural process. Henry M. Cowles reveals the intertwined histories of evolution and experiment, from Charles Darwin’s theory of natural selection to John Dewey’s vision for science education. Darwin portrayed nature as akin to a man of science, experimenting through evolution, while his followers turned his theory onto the mind itself. Psychologists reimagined the scientific method as a problem-solving adaptation, a basic feature of cognition that had helped humans prosper. This was how Dewey and other educators taught science at the turn of the twentieth century—but their organic account was not to last. Soon, the scientific method was reimagined as a means of controlling nature, not a product of it. By shedding its roots in evolutionary theory, the scientific method came to seem far less natural, but far more powerful.

This book reveals the origin of a fundamental modern concept. Once seen as a natural adaptation, the method soon became a symbol of science’s power over nature, a power that, until recently, has rarely been called into question.

REVIEWS
Cowles is an engaging narrator of this important story and a sensitive analyst of its outcome…Cowles shows that what began as a universal process embracing human thought and natural evolution became a prescriptive list of rules setting science apart from everything else…[A] valuable book.
-- Jessica Riskin New York Review of Books


Illuminating…Noting that the idea of the scientific method is a myth, Cowles sets out to trace the origins of its role as the supposed unique route to knowledge, in particular the origins of its educational standing in American culture.
-- Stephen Gaukroger Times Literary Supplement


An absorbing read that illuminates the history of the natural and social sciences in Britain and the US. It features nuanced readings of important scientific figures from a new perspective. Well-argued, accessible, and based on extensive research, Cowles’s hypothesis about the transformation of the scientific method by evolutionary theory should win the struggle for existence in Darwin’s ‘tangled bank’ of scholarship on 19th-century science.
-- Bernard Lightman Physics Today


Absolutely brilliant…The book has important and tantalizing implications for those interested more generally in the twentieth-century modernist turn to method, process, procedure, and technique…What Cowles does that is arresting, in my view, is to show to spectacular effect how the Darwinian ‘method of nature’ underlies (even as it mirrors) the pragmatist method…A wonderfully smart book that complicates our understanding of modernism by giving us a unique account of its past.
-- Kunal Parker Jotwell


With dazzling brilliance and rare verve, Henry Cowles has accomplished what historians dream of—seizing upon an important fixture in our lives that we often take for granted, and making its story come alive. What is science? Anyone with even a passing interest in that question will have to read this book.
-- Jonathan Levy, author of Freaks of Fortune: The Emerging World of Capitalism and Risk in America


Cowles brings to life a lush and unexpected intellectual history of the concept of the scientific method. This fine book will be of great significance to both historians and practicing scientists interested in the advances and limitations of contemporary science.
-- Richard Prum, author of The Evolution of Beauty: How Darwin’s Forgotten Theory of Mate Choice Shapes the Animal World—and Us


The Scientific Method tells the exciting story of how nineteenth-century psychologists and anthropologists were crucial in establishing how to think about science. Unexpected, provocative, and far-reaching, this book positions the human sciences at the center of rational thought.
-- Janet Browne, author of Charles Darwin: A Biography


Henry Cowles has produced an extremely rich history of the idea of ‘the scientific method.’ He recounts its eventful life from the crucial period when modern science took shape, tracing the influences of many diverse intellectual trends such as Darwinism and pragmatism. This is a unique and exemplary blend of philosophical and historical scholarship, with pertinent lessons for the troubled relationship between science and politics today.
-- Hasok Chang, author of Inventing Temperature: Measurement and Scientific Progress


A fascinating story of how key figures in the history of science struggled to make sense of the fundamental nature of knowledge construction and answer the enduring question of what it means to think…A truly impressive work of scholarship.
-- John L. Rudolph Social History of Medicine


[A] compelling history revealing an image of science as something natural, something we can all relate to and endorse because the ‘scientific method’ of our textbooks is not really specific to science. It is simply how we think.
-- Brandon A. Conley Quarterly Review of Biology


Cowles combines exhaustive research with interesting storytelling to weave a fascinating narrative about the history of the idea of method…As a book of cultural history, The Scientific Method is a fascinating, detailed account of how ‘method’ threaded its way through political, cultural, social, and academic discussions…Impressive scholarship.
-- Perspectives on Science and Christian Faith


Provides a rich and fascinating history and has a compelling story to tell…Cowles’s history of the rise of the myth of the scientific method reverberates with our own present anxieties about science denialism and being in a ‘post-truth’ era.
-- Alisa Bokulich and Federica Bocchi Isis


Searching, learned, and engrossing…What Cowles gives us in The Scientific Method—and it is a gift—is the history of one version of the myth of the scientific method. It is a compelling history, and he tells it well.
-- Greg Priest History and Philosophy of the Life Sciences