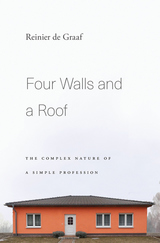 “An original and even occasionally hilarious book about losing ideals and finding them again… [De Graaf] deftly shows that architecture cannot be better or more pure than the flawed humans who make it.”
—The Economist

Architecture, we like to believe, is an elevated art form that shapes the world as it pleases. Four Walls and a Roof turns this fiction on its head, offering a candid account of what it’s really like to work as an architect. Drawing on his own tragicomic experiences in the field, Reinier de Graaf reveals the world of contemporary architecture in vivid snapshots: from the corridors of wealth in London, Moscow, and Dubai to the demolished hopes of postwar social housing in New York and St. Louis. We meet ambitious oligarchs, developers for whom architecture is nothing more than an investment, and layers of bureaucrats, consultants, and mysterious hangers-on who lie between any architect’s idea and the chance of its execution.

“This is a book about power, money and influence, and architecture’s complete lack of any of them… Witty, insightful and funny, it is a (sometimes painful) dissection of a profession that thinks it is still in control.”
—Financial Times

“This is the most stimulating book on architecture and its practice that I have read for years.”
—Architects’ Journal

REVIEWS
Something of a revelation…[De Graaf] has produced an original and even occasionally hilarious book about losing ideals and finding them again…He deftly shows that architecture cannot be better or more pure than the flawed humans who make it.
-- The Economist


[It] tells the stories that tend to get left out of official histories, but which actually shape our physical environment…De Graaf’s book is sharp, revealing, funny, drily passionate and not always encouraging.
-- Rowan Moore The Guardian


This is a book about power, money and influence, and architecture’s complete lack of any of them. It is a book not about architecture’s successes but about its failures. Witty, insightful and funny, it is a (sometimes painful) dissection of a profession that thinks it is still in control.
-- Edwin Heathcote Financial Times


De Graaf is an excellent, witty and perceptive essayist. The heart of the book is a series of astonishing accounts of the protracted—and as it turns out, all doomed—sagas to get big urban projects approved and built in London (just pre-crash), Moscow (just pre-Putin), the Emirates (just pre-oil slump), and Kurdistan (just pre-Isis). The way de Graaf builds up to each (in hindsight) inevitable disappointment is masterly…He emerges as an unlikely, deeply skeptical architectural Everyman.
-- Hugh Pearman The Spectator


This is the most stimulating book on architecture and its practice that I have read for years. Not only is de Graaf a good anecdotalist (his hilarious account of a long-winded and fruitless masterplanning competition in Russia should be turned into a film), but a perceptive analyst of how architecture represents, or connects with, wider political and economic movements and trends.
-- Paul Finch Architects’ Journal


Provocative…De Graaf has no fixed method. But the impressive extent and depth of his knowledge persistently inform his meditations, which take in many subjects. His mood is invariable. He is constantly and exhilaratingly cynical…Because he displays such candor—albeit polished candor, and such a perfectly gauged lack of tact—it is easy to forget that de Graaf is an architect, an insider, part of the system he dissects…De Graaf is likely to remain an architect for decades to come. In those circumstances, his enthusiasm for biting the hand that feeds him is admirably risky.
-- Jonathan Meades Literary Review


A refreshingly accessible, honest portrayal of a quixotic field from someone within the most successful architecture firm in the world today… One of the most intelligent, candid discussions on architecture I have read to date. Thus, Four Walls and a Roof offers an entertaining, penetrating, and much needed primer on the current state of the profession and the contemporary global forces influencing the built environment. A must-read list for architects, planners, and urban designers alike.
-- Erick Villagomez Spacing


Reinier de Graaf paints an honest picture of what it is like to work as an architect today…[He] provides engaging stories about the banal, everyday reality of working for an acclaimed firm. These vivid, uncompromising narratives are contextualized with shrewd essays about architecture’s lost ideals, its false pretentions, and utter dependence on forces far more powerful than design.
-- Mark Minkjan Failed Architecture


Ruthlessly honest about what it is like to work at architecture and wickedly cynical about how power works in our current economy, Reinier de Graaf’s vantage point from a top architectural firm doesn’t make him crow of success but, rather, pushes us architects, for better or worse, to keep fighting the good fight. Reading Four Walls and a Roof will make you laugh, cry, and so identify.
-- Peggy Deamer, Yale School of Architecture


The title of this book, provided by an innocent enquirer, has provoked Reinier de Graaf into a shrewd, lucid, and engaging survey of the architecture and building scene. He seems to have been everywhere and listened to anyone who is—or has been—active and influential in building and planning, from Prince Charles to Buckminster Fuller. Yet he has also managed to direct attention to some neglected personalities, past and present—Ernst Neufert, Lucien Kroll. You will not find a better guide to planning, building, and architecture of the last half-century!
-- Joseph Rykwert, Professor Emeritus, University of Pennsylvania


This is a terrific book. It weaves together reflections on design, history, politics, and economics in a seamless and illuminating manner, offering a kaleidoscopic portrait of the state of architecture and its recent history. The writing is delightful, always irreverent, and at times exceedingly funny.
-- Bernardo Zacka, Research Fellow, Stanford University and University of Cambridge

TABLE OF CONTENTS
Cover
Title Page
Copyright
Epigraph
Contents
Preface
I. Authority
1. I Will Learn You Architecture!
2. More Specifically, Everything!
3. Let Me Finish!
4. Four Walls and a Roof
II. Default by Design
5. Bloody Fools! The Story of Pimlico School, 1970–2010
6. Architektur ohne Eigenschaften
7. Neufert: The Exceptional Pursuit of the Norm
8. Reference without a Source: The Appeal of Atlanta Airport
9. The Inevitable Box
III. Found Causes
10. Spaceship Earth
11. Mies en Scène
12. Intruders: How Smart Technology Infiltrates Architecture
13. “Public” Space
14. From CIAM to Cyberspace: Architecture and the Community
15. With the Masses: The Architecture of Participation&
IV. Trial and Error
16. Ex Nihilo Nihil Fit: Part One
17. London
18. How Is Denmark?
19. Ex Nihilo Nihil Fit: Part Two
20. Facing the Facts
21. Naukograd
22. A Spanish Tender
23. On Hold
V. Powers That Be
24. After the End of History
25. The Other Truth
26. Socialist in Content, Realist in Form
27. The Descendant: A Conversation with Xenia Adjoubei, Nikita Khrushchev’s Great-Granddaughter
28. Undesirable Work Styles
29. A Benevolent Dictator with Taste
30. Royal Approval
31. His Architect
32. A Property Developer for President
VI. Megalopoli(tic)s
33. A Faustian Bargain
34. Amanhã
35. Smart Cities of the Future
36. The Sum of All Isms
37. Dear Mr. Barber
38. At Your Service: Ten Steps to Becoming a Successful Urban Consultant
39. Rankings
VII. Progress
40. Coup de Grâce: Pruitt-Igoe Revisited
41. The Century That Never Happened
42. In Memoriam: A Photo Essay
43. The Captive Globe
44. Remains of a Brave New World
Notes
Acknowledgments
Chapters Previously Published