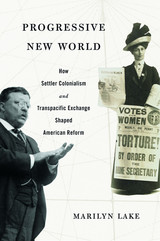 The paradox of progressivism continues to fascinate more than one hundred years on. Democratic but elitist, emancipatory but coercive, advanced and assimilationist, Progressivism was defined by its contradictions. In a bold new argument, Marilyn Lake points to the significance of turn-of-the-twentieth-century exchanges between American and Australasian reformers who shared racial sensibilities, along with a commitment to forging an ideal social order. Progressive New World demonstrates that race and reform were mutually supportive as Progressivism became the political logic of settler colonialism.

White settlers in the United States, who saw themselves as path-breakers and pioneers, were inspired by the state experiments of Australia and New Zealand that helped shape their commitment to an active state, women’s and workers’ rights, mothers’ pensions, and child welfare. Both settler societies defined themselves as New World, against Old World feudal and aristocratic societies and Indigenous peoples deemed backward and primitive.

In conversations, conferences, correspondence, and collaboration, transpacific networks were animated by a sense of racial kinship and investment in social justice. While “Asiatics” and “Blacks” would be excluded, segregated, or deported, Indians and Aborigines would be assimilated or absorbed. The political mobilizations of Indigenous progressives—in the Society of American Indians and the Australian Aborigines’ Progressive Association—testified to the power of Progressive thought but also to its repressive underpinnings. Burdened by the legacies of dispossession and displacement, Indigenous reformers sought recognition and redress in differently imagined new worlds and thus redefined the meaning of Progressivism itself.


This is a landmark book that provides an integral account of the circulatory systems that connected white reform communities in the large Anglophone societies that lay on either side of the Pacific. In abundant detail, Lake shows how the democratic and racialist programs of these reformers were two sides of the same settler–colonialist coin.
-- Doug Rossinow, coeditor of Outside In: The Transnational Circuitry of US History


Few Americans know that in the early twentieth century Australia passed the first minimum-wage laws and gave women the vote; but American reformers were inspired by their counterparts in the antipodes. Marilyn Lake has written a stunning book about transpacific Progressivism.
-- Mae M. Ngai, author of Impossible Subjects: Illegal Aliens and the Making of Modern America

Lake powerfully invokes the Australasian connection to U.S. politics and culture, substantiating the range and depth of those ties and illuminating political thought at both ends of the geographical divide. A worthy counterpart to Daniel Rodgers’s iconic Atlantic Crossings, Progressive New World offers a fresh and valuable take on the transnational Progressive era.


-- Leon Fink, author of The Long Gilded Age: American Capitalism and the Lessons of a New World Order


[An] important new book…U.S. historians will need to reassess the assumption that progressive reform was either an internal product or a result of transatlantic dialogues alone…The treatment of settler colonialism is Lake’s most arresting contribution.
-- Australian Book Review


Imitation might be the greatest form of flattery, but if Americans flatter themselves that the rest of the free world has always wanted to emulate their democratic institutions and national habits, Lake’s book plainly demonstrates that, at the turn of the 20th century, the flow of imitation was decidedly in Australia’s direction. America’s brightest minds and most ardent reformers looked to Australia to see which way the winds of change blew.
-- Clare Wright Sydney Morning Herald


Makes an important contribution to our understanding of Progressivism, and Lake’s insistence that we see American history through the lens of settler colonialism provides a powerful framing to look at familiar histories anew.
-- Kornel S. Chang Labor