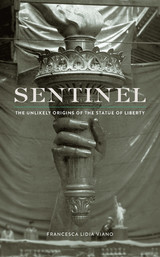 The story of the improbable campaign that created America’s most enduring monument.

The Statue of Liberty is an icon of freedom, a monument to America’s multiethnic democracy, and a memorial to Franco-American friendship. That much we know. But the lofty ideals we associate with the statue today can obscure its turbulent origins and layers of meaning. Francesca Lidia Viano reveals that history in the fullest account yet of the people and ideas that brought the lady of the harbor to life.

Our protagonists are the French sculptor Frédéric Auguste Bartholdi and his collaborator, the politician and intellectual Édouard de Laboulaye. Viano draws on an unprecedented range of sources to follow the pair as they chase their artistic and political ambitions across a global stage dominated by imperial rivalry and ideological ferment. The tale stretches from the cobblestones of northeastern France, through the hallways of international exhibitions in London and Paris, to the copper mines of Norway and Chile, the battlegrounds of the Franco-Prussian War, the deserts of Egypt, and the streets of New York. It features profound technical challenges, hot air balloon rides, secret “magnetic” séances, and grand visions of a Franco-American partnership in the coming world order. The irrepressible collaborators bring to their project the high ideals of liberalism and republicanism, but also crude calculations of national advantage and eccentric notions adopted from orientalism, freemasonry, and Saint-Simonianism.

As entertaining as it is illuminating, Sentinel gives new flesh and spirit to a landmark we all recognize but only dimly understand.


An attempt to pick apart the complex and sometimes strange history of this colossal gift to America from the government and people of France.
-- The Economist


Viano’s revisionist account of the statue’s ‘unlikely origins’ is a welcome corrective to settled opinion…This is superb scholarship, interpreted with an elegant touch and beautifully produced.
-- Stephen Bayley Spectator


Extravagant and gripping… Sentinel offers a sweeping dual narrative and reads like a Victorian novel. Viano writes with the flair of a novelist and a historian’s humility. The research is prodigious, the set piece alive with detail.
-- Dominic Green Literary Review


Does as much as any book can…to restore Bartholdi’s grim goddess some of her original mystery, and in the process it tells the story of Liberty’s birth with a probing complexity that’s a far better tribute to both the country of her origin and the country that welcomed her, the most prominent immigrant in the world.
-- Steve Donoghue Open Letters Review


Lively, detailed, and full of surprises, a fascinating account of the Statue of Liberty’s conception and construction.
-- James T. Kloppenberg, Harvard University


Sentinel is a cornucopia of a book, not just an in-depth history of the origins and evolution of an iconic monument, but a narrative full of insights. Viano writes with breathtaking scope and remarkable knowledge. No other work on the Statue of Liberty is as rich or rewarding.
-- John Brewer, California Institute of Technology


In her astonishing narrative, Viano overturns virtually every assumption Americans have about their famous statue standing in New York’s harbor. Her global story traces how a ‘devilish colossus,’ inspired by Eastern esoteric knowledge and meant to stand in Egypt as a testament of French colonial domination, became an ambiguous symbol of American liberty. Viano’s indefatigable research into long-forgotten documents has yielded a truly wonderful history.
-- R. Laurence Moore, Cornell University


The Statue of Liberty is so American, and so bound up with an idea of America’s largesse and openness to the rest of the world, that we can easily forget that it was designed by an Alsatian sculptor and gifted to the United States by France. Francesca Viano brilliantly reorients the statue’s meaning by recovering its truly international origins. At once a detective story about its enigmatic creators, an appreciation of the artistic and philosophical influences that informed its design, and a rumination on liberty—colossal but fragile—in an age of empire, Sentinel offers a dazzling perspective on the most famous statue in the world.
-- Nicholas Guyatt, University of Cambridge