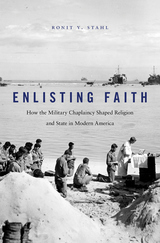 A century ago, as the United States prepared to enter World War I, the military chaplaincy included only mainline Protestants and Catholics. Today it counts Jews, Mormons, Muslims, Christian Scientists, Buddhists, Seventh-day Adventists, Hindus, and evangelicals among its ranks. Enlisting Faith traces the uneven processes through which the military struggled with, encouraged, and regulated religious pluralism over the twentieth century.

Moving from the battlefields of Europe to the jungles of Vietnam and between the forests of Civilian Conservation Corps camps and meetings in government offices, Ronit Y. Stahl reveals how the military borrowed from and battled religion. Just as the state relied on religion to sanction war and sanctify death, so too did religious groups seek recognition as American faiths. At times the state used religion to advance imperial goals. But religious citizens pushed back, challenging the state to uphold constitutional promises and moral standards.

Despite the constitutional separation of church and state, the federal government authorized and managed religion in the military. The chaplaincy demonstrates how state leaders scrambled to handle the nation’s deep religious, racial, and political complexities. While officials debated which clergy could serve, what insignia they would wear, and what religions appeared on dog tags, chaplains led worship for a range of faiths, navigated questions of conscience, struggled with discrimination, and confronted untimely death. Enlisting Faith is a vivid portrayal of religious encounters, state regulation, and the trials of faith—in God and country—experienced by the millions of Americans who fought in and with the armed forces.


Cutting across a century of perpetual war, shifting its analytic gaze from bureaucratic functions of the state to the people of faith who served, from mainline denominations to religious movements on the rise, Ronit Stahl’s study of the military chaplaincy brilliantly recasts our understanding of church–state relations in the modern era. Stahl vividly shows how the military chaplaincy has offered the means for Washington to encourage proper religious expression in a pluralist society, and for faith communities to earn political legitimacy in the eyes of their peers. An essential book for students of American religion, politics, and history.
-- Darren Dochuk, author of From Bible Belt to Sunbelt


Enlisting Faith tells a compelling story, showing how the military chaplaincy has entailed deep mutual engagement between government and the great diversity of American religious life. Stahl’s excellent work is a must-read for anyone interested in religious freedom, separation (or not) of church and state, war, politics, and the many challenges of pluralism.
-- Sarah Barringer Gordon, author of The Spirit of the Law


The federal government used the military chaplaincy to unify diverse Americans, promote ‘ethical’ personal behavior, and marshal faith on behalf of domestic and foreign policy goals. In Stahl’s illuminating book, we listen as chaplains, GIs, and their families wrestle with issues posed by race riots, rape, pacifism, feminism, proselytizing, interfaith marriage, and untimely death. She adds enormously to our understanding of the evolving relationship between religion and the American state across much of the twentieth century.
-- Wendy L. Wall, author of Inventing the “American Way”


Enlisting Faith deserves to be read by anyone interested in an underexplored aspect of the intersection of religion and the state or, even more, in the stories of those who honorably served them both.
-- Marc M. Arkin Wall Street Journal


Given the perennial argument over whether the United States military should or should not be a social laboratory, Stahl’s book invites fresh consideration of the connections between military and society…Ronit Stahl’s book is a thoughtful and well-researched account of a singular religious institution, the military chaplaincy, that has weathered a century of profound social change…In an age when some want to preserve the military ethos from social changes, Ronit Stahl reminds us that concerns for authentic individual expression, in the form of religious belief, have been in play since the United States began mobilizing its citizen soldiers in the modern era and even earlier. Perhaps the greatest value of this book is that it shows us how the U.S. military has been a social laboratory for many decades, thanks in large part to its seemingly innocuous and oft overlooked chaplains.
-- Michael Peterson The Strategy Bridge


[An] outstanding, definitive book… Expertly, with deep research and great stories, historian Stahl charts the course of the military chaplaincy from WWI (when the current chaplain system effectively was institutionalized) to the present… A supremely important, well-executed work of scholarship, sure to have wide influence.
-- P. Harvey Choice


Enlisting Faith contributes a marvelous exploration of how the American government attempted to manipulate religious institutions into supporting its political missions…Stahl deftly reveals what kind of religiosity the American state encourages and discourages in its citizens, and to what lengths the state will go to realize its vision of acceptable American spirituality.
-- Alan J. Clark Reading Religion


Offers many significant ways in which the military and faith influenced each other through compromise and creative thought. Discussions of the atomic bomb, Eisenhower’s support of the chaplaincy program, and the Vietnam War are all particularly interesting and informative.
-- Nancy Saultz Radloff Anglican and Episcopal History


Well worth the time of any scholar or casual reader interested in the military chaplaincy and the evolution of American religion.
-- Patrick G. Stefan Religious Studies Review