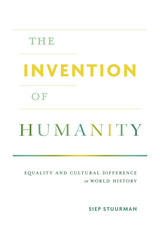 For much of history, strangers were routinely classified as barbarians and inferiors, seldom as fellow human beings. The notion of a common humanity was counterintuitive and thus had to be invented. Siep Stuurman traces evolving ideas of human equality and difference across continents and civilizations from ancient times to the present.

Despite humans’ deeply ingrained bias against strangers, migration and cultural blending have shaped human experience from the earliest times. As travelers crossed frontiers and came into contact with unfamiliar peoples and customs, frontier experiences generated not only hostility but also empathy and understanding. Empires sought to civilize their “barbarians,” but in all historical eras critics of empire were able to imagine how the subjected peoples made short shrift of imperial arrogance.

Drawing on the views of a global mix of thinkers—Homer, Confucius, Herodotus, the medieval Muslim scholar Ibn Khaldun, the Haitian writer Antenor Firmin, the Filipino nationalist Jose Rizal, and more—The Invention of Humanity surveys the great civilizational frontiers of history, from the interaction of nomadic and sedentary societies in ancient Eurasia and Africa, to Europeans’ first encounters with the indigenous peoples of the New World, to the Enlightenment invention of universal “modern equality.” Against a backdrop of two millennia of thinking about common humanity and equality, Stuurman concludes with a discussion of present-day debates about human rights and the “clash of civilizations.”

REVIEWS
Stuurman writes with great clarity and authority. He is judicious, insightful, and often thinks against the grain in a fresh and productive way.
-- Darrin M. McMahon, author of Divine Fury: A History of Genius


Far from being an empirical fact or obvious truth, our common humanity, Stuurman shows in this bold and magisterial history, had to be imagined and invented. Sprightly in its coverage of a vast expanse of time and wide-ranging in its mastery of a host of thinkers across space, Stuurman’s challenging and uplifting account sets a new standard for global intellectual history and will prompt grateful agreement and productive dispute in the years to come.
-- Samuel Moyn, author of The Last Utopia: Human Rights in History


﻿[A] splendid book…Stuurman’s panoramic vision of discovery and invention, reiterated in many different cultural and religious idioms across a vast expanse of time and space, makes for a dramatically original history.
-- Michael Walzer The Nation


The book demonstrates [Stuurman’s] enormous scope of knowledge and his consistent effort to challenge Eurocentric bias in writing of the global history of ideas. This is by far the most comprehensive, authoritative treatment of the subject matter.
-- X. Fan Choice


In this season of growing inequality, few books could be more timely than one focused on the origins and evolution of the concept of equality in world history. Siep Stuurman has undertaken the herculean task of exploring the emerging belief in the commonality of all humankind from the beginning of complex human societies to the present. The author is ambitious in his scope and impressive in his familiarity with cultural traditions from every corner of the globe. He has written a balanced and erudite treatment of complex issues, transcending the ideological divisions of our fractured age to remind readers that the impulse to cooperate, to recognize a shared humanity, to draw from the collective wisdom and knowledge of others, has been inherent in the human experience for thousands of years…A marvelous, truly magisterial work that leaves the reader with a deeper and richer appreciation of the human condition.
-- Alan T. Wood American Historical Review